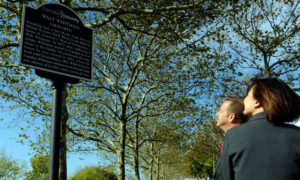 The Freeholder Board unveiled a historical marker honoring Walt Whitman, America’s “poet of democracy” that lived in Camden from 1873 until his death in 1892. While living in Camden, Whitman continue to write and edit editions of his life’s work, Leaves of Grass. It is from this work that the quotation on the southern fascia of Camden City Hall is taken, “In a dream I saw a city invincible.”

“Walt Whitman certainly left his mark on American literature, and now the good gray poet will have a permanent marker in his adopted city of Camden,” said Freeholder Director Louis Cappelli, Jr. “The location for the plaque on the waterfront is between his unassuming home a few blocks away and the former Camden ferry dock that he captured with exhilaration as ‘communion with the waters’ in Specimen Days and Collect.”

This is the second historical plaque the Freeholder Board has installed as part of a project to recognize significant individuals across Camden County for their achievements and contributions. The first was placed at Merchantville Country Club honoring John McDermott, the first American to win the U.S. Open.