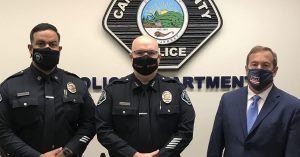 (Camden, NJ)- Camden County Freeholder Director Louis Cappelli Jr. today announced that County Police Chief Joseph Wysocki will retire at the end of December 2020 after serving the City and county for 30 years. Chief Wysocki, who rose through the ranks to become Chief of Police, was part of the transition of Camden’s police force from city to county control, as well as the transformation of the county’s force into one of the nation’s most widely lauded public safety agencies for its dramatic reduction in crime and full reset of relations between the police and the community.

Cappelli talked about Wysocki’s impact on the department and his dedication to the city.

“Everyone who lives in, works in, or cares about the city of Camden owes Chief Wysocki their thanks and deep gratitude,” Cappelli said.  “People know that statistics only tell part of Camden’s story, but the real evidence of Joe’s impact is the fact that children are back playing in Camden’s streets and there’s a new spirit of cooperation between the police and the community. He’s kept pushing the limits in de-escalation and training and every day came to the police administration building to make the city a safer place.”

During his career in Camden City, Chief Wysocki served in both uniformed and investigative assignments. As a key member of the FBI’s Camden Violent Crimes Task Force Special Investigations Unit and supervisor of the High Intensity Drug Trafficking Areas, (HIDTA) Long-Term Investigation Unit, Chief Wysocki led successful investigative campaigns, dismantling and prosecuting several violent crime organizations. He served as the commander of Internal Affairs from 2009 through 2015, during which time he directly shaped the transformation of the Department’s culture of policing and accountability. As the Assistant Chief of the Department, Chief Wysocki was the contemporary architect of several mission-critical initiatives including: Project Guardian, the Department’s Strategic Operations Command, and the team review and accountability process.

Sister Helen Cole, a social worker at Guadalupe Family Services, talked about Wysocki’s commitment to the city over the past 30 years.

“Joe has a heart of gold and has contributed significantly in making Camden a safer place to live and work,” Cole said. “His imprint will be felt for years to come in the countless kids that have gone through Project Guardian and the work he has done to support positive initiatives throughout the city.”

Sheilah Greene, a stakeholder in the Parkside neighborhood for generations and a member of the Parkside Business and Community in Partnership, said Wysocki was committed to the community.

“Service starts from within and Joe was, and is, always in service to our city whenever we need him,” Greene said. “He was never afraid to reach out to me or anyone else and was so easy to work with that I will miss him when he’s gone. He was one of the great chiefs the city has had, and he will be leave big shoes to fill.”

Wysocki took over the top job in the department and served as the chief executive during an unprecedented period of time in American history. After only six short months on the job an international pandemic struck the state and the nation and Wysocki met the challenge head on. He deployed officers into the community armed with public health information and masks. He pinpointed outbreaks and high rates of transmission and then marshalled the resources to combat the virus. In order to continue a robust dialogue with residents during COVID, Wysocki started meeting regularly with the city’s clergy virtually to disseminate vital public safety and health information and has continued those meetings for the past eight months.

Three months following the city’s first COVID case, Wysocki responded to the murder of George Floyd. At the outset of the tragic killing, Wysocki spoke to the public flanked by 25 members of the city’s clergy to condemn the killing. He later participated in several demonstrations throughout the city after his initial response to Floyd’s murder.

Furthermore, Wysocki continued to build on the foundations of de-escalation training, using body worn camera video as a training component. He created a video room to go over incidents in a play-by-play fashion with a practical component and implemented daily training on a VirTra-300 machine for officers. The VirTra-300 was also used as an educational component for citizens and stakeholders in the community to show the challenges that officers face daily. Many of these concepts are groundbreaking, including creating a film room for officers to review incidents in the same way an NFL quarterback can review game film.

Executive Director of the Police Executive Research Forum, Chuck Wexler, spoke about Wysocki’s commitment to community interaction and engagement being a game changer for the city.

“Through the progression and evolution of this agency Joe has provided a steady hand in what has become one of the most challenging periods of time for law enforcement in modern history,” Wexler said. “Chief Wysocki has continued a well-heeled tradition of enhancing and improving training and de-escalation strategies to build strong bridges with the community and, after 30 years of service in Camden, has certainly left the department better off than he found it.”

Captain Gabriel Rodriguez will assume command of the department upon Wysocki’s retirement on Jan. 1, 2021. Rodriguez has served as the chief’s executive officer and is the community captain in command under Wysocki.

“The men and women of this organization are the lifeblood and primary contributors to everything we have achieved as an agency. I could not be prouder of the tremendous work, risks taken, and sacrifices made by my officers and their families every single day,” Wysocki said. “Nevertheless, I know that none of the department’s success could occur without the help of our community, they have played a pivotal role in the turnaround of this great city. I am looking forward to the next chapter of my life moving forward in private industry and continuing to give back to the city that has given me so much.”