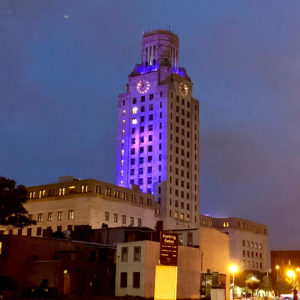 (Camden, NJ) – On Tuesday, Sept. 10, the Ben Franklin Bridge will glow teal, while City Hall and the James J. Florio Center for Public Service will be lit in purple in honor of World Suicide Prevention Day. Camden County residents are also being asked to show their support by wearing teal or purple to remember a lost loved one and for the survivors of suicide.

“Tens of thousands of Americans die each year by suicide, a staggering figure that is only made more distressing by examining the demographics of those most affected. Today, suicide is the second leading cause of death in children and adults between ages 10 and 34,” said Freeholder Carmen Rodriguez, liaison to the Health Department. “On this World Suicide Prevention Day, we’re encouraging everyone to show their support and learn the signs of suicide so that they may be able to save a friend, family member, or neighbor.”

Camden County is observing National Suicide Prevention Week – a week-long campaign to educate the public about suicide prevention and the devasting reality of suicide in America – from Sept. 8 to Sept. 14. According to the Centers for Disease Control (CDC), New Jersey has the second-lowest suicide death rate in the United States, yet still loses 2.2 residents every day to suicide.

“Suicide is intertwined with so many other major issues – mental health, drug abuse and addiction, the availability of firearms – and it is a tragic reality that impacts families of every kind,” Rodriguez said. “But, we know that it is preventable if we catch the signs and direct those at risk to the help they need. That’s why it’s so important to know the signs of suicide and what to do when you spot them.”

The CDC identifies several prominent warning signs for someone at risk of suicide, including:

The Freeholder Board is reminding Camden County residents that help is never out of reach. If you or someone you know is having thoughts of suicide, or exhibiting warning signs of suicide, contact the National Suicide Prevention Lifeline at 1-800-273-TALK (1-800-273-8255) or visit the Lifeline online at https://suicidepreventionlifeline.org/.

The Camden County Office of Mental Health and Addiction hosts informational events throughout the year on suicide prevention and risk reduction that are free and open to the public. For information on when the next event is being held or for other mental health and substance abuse related information, contact the office at (856) 374-6361.