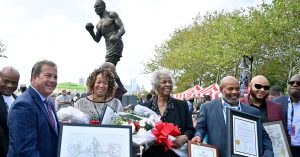 (Camden, NJ) — The Board of Commissioners and the Camden County Historical Society unveiled the statue of boxing legend Arnold “Jersey Joe Walcott” Cream on Saturday afternoon. The 8-foot tall bronze likeness of the Camden native now proudly sits along the Camden Waterfront at the Wiggins Park Promenade.

“Today was an honor and a privilege to recognize the accomplishments and legacy of a native son of Camden County,” Cappelli said. “Jersey Joe embraced hard work and set standards that embody the soul and spirit of the residents that reside in our region. He was a real life Rocky and never back down, he didn’t back down against the best fighters in the world to become the champ and didn’t back down against institutional racism to become the first African American Sheriff in Camden County history. Mr. Cream was so much more than a boxer and sheriff, he was a man who loved his family and worked hard creating an everlasting picture of greatness for our community that will now live forever at the waterfront.”

Arnold Cream was born in Pennsauken, grew up in Merchantville and went on to become a professional boxer who competed from 1930 until 1953 and held the world heavyweight title from 1951 to 1952. He made Camden City his home and was the oldest man to win the title – at the age of 37 – until 45-year-old George Foreman broke the record in 1994. Walcott was an actor for a time after he retired, playing small parts in movies in television shows. He went on to become the first African-American to old the elected position of Sheriff of Camden County – a position he held from 1971 to 1974. Following his time as sheriff, Walcott served as the chairman of the New Jersey State Athletic Commission from 1975 to 1984.

Camden City Mayor and friend of the Cream family, Vic Carstarphen, spoke about the man, family and legacy of Jersey Joe that will live on into the future through this statute.

“Jersey Joe Walcott is a Camden icon and a trailblazer,” Carstarphen continued. “He set the standard for those who followed in his footsteps, including myself.  His athletic accomplishments are well documented, his honorable career as Sheriff was momentous and above all his impact on Camden and the greater community was profound.  That is why it is appropriate that we honor this incredible individual with his own statue prominently displayed in his hometown on the Camden Waterfront.  It is wonderful to know this monument to Jersey Joe will remind all who visit and reside in Camden of what can be achieved through hard work and determination.”

The tribute was created by renowned local sculptor Carl LeVotch. His design includes an 8-foot bronze figure sculpture with two bronze high relief sculptures, and a bronze replica of his ring belt. These works of art are affixed to a pedestal and sit at the Wiggins Park Promenade.

Congressman Donald Norcross attended the ceremony on Saturday and talked about the impact Cream made on the community.

“Jersey Joe Walcott won his heavyweight title through grit and determination, winning the championship on his fifth attempt at the title,” Norcross said. “That’s the legacy he leaves us: of not giving up, even when things are tough. He used that determination and grit to serve his community too. Jersey Joe came back home to Camden after boxing to enter public service and fought tirelessly for his city and state. I’m glad to see the honorary statue of Jersey Joe Walcott take its place as a physical reminder of his inspiring legacy,”

Vincent Cream, Arnold Cream’s grandson and creative consultant for the monument, explained that unlike other fictional boxers, Jersey Joe was the real-life embodiment of grit and resiliency.

“You know Rocky was a fictional champion and its one of the most celebrated statutes in Philadelphia. Here, in Wiggins Park, this landmark location in Camden City, we put up a real champion, a man that embraced and embodied hard work and determination to become the best at everything he did,” Cream said. “My grandfather was the heavy weight champion of the world and devoted his life to making the city a better place. Moving forward, kids can visit this monument and see what a true, real life, role model looks like.”

Camden County Sheriff Gilbert “Whip” Wilson, who holds the same office Cream held in the mid-1970s, talked about his influence on him.

“Jersey Joe paved the way for people like me to hold this office,” Wilson said. ‘I greatly admired Arnold and I’m here today serving in this office because of the sacrifices he made. In short, every day I come to work I know I’m standing on his shoulders.”

Former Camden Mayor and CEO of the Rowan University/Rutgers-Camden Board of Governors, Dana Redd, talked about the

“They say “all the “GREATS” come from Camden, and such is the legend of Jersey “Joe” Walcott,” Redd explained. “Although he was born in Pennsauken, he is regarded and hailed as one of Camden’s very own — a history maker and trailblazer in the African American community not only in the sports arena but also, —- in the political arena.”

State Senator Jim Beach talked about the worthy praise and acknowledgment Cream got at the time of his boxing career and how this statute will allow it to continue into the future.

“This monument is not only a tribute to the boxing legacy of Jersey Joe, it also honors Arnold Cream the man- a barrier breaker, public servant and role model for the ages,” Beach said.

Plans for the statue were unveiled in 2019. The Camden County Historical Society raised $185,000 to fund the project. At this time half of the allocated funds have been raised and fundraising will continue by the society.

For more information on supporting the statute and the historical society can be found herewww.camdencounty.com/enjoy-camden-county/jersey-joe-walcott/. 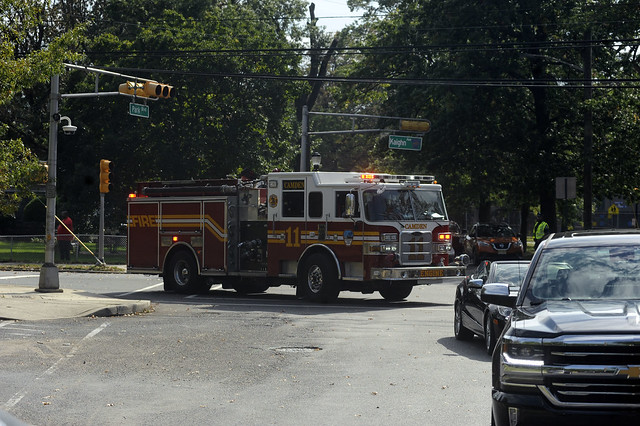