Commissioners to Light Buildings for Ukraine 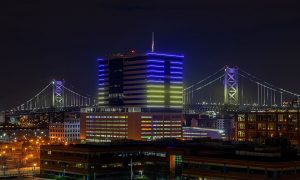 (Camden, NJ) – To show solidarity with the nation of Ukraine and its people as it endures an invasion waged by war criminal, Vladimir Putin, and the Russian government, several buildings in Camden City will be lit up in blue and yellow, the colors of the Ukrainian flag, beginning Tuesday, March 1. These buildings include City Hall, the Florio Building and the Triad Building as well as the Ben Franklin Bridge.

“Watching the disturbing images of the people of Ukraine be stripped of their sovereignty and thrown into a deadly war for their independence and democracy has been completely appalling and heartbreaking,” said Commissioner Director Louis Cappelli Jr. “Camden County stands firm with Ukraine and its citizens to condemn the actions of Vladimir Putin, who is the evil, autocratic tyrant behind this war. Although it’s a small gesture, lighting up our buildings in the colors of the Ukrainian flag will show that Putin and the Russian Government have no support here in Camden County and that we are here for our Ukrainian brothers and sisters who call this county their home.”