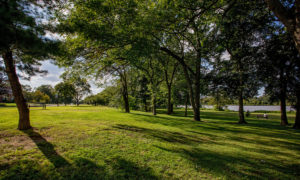 (Gloucester Township, NJ) — The Camden County Board of County Commissioners is moving forward with planned improvements to the county’s memorial to local victims of terrorism located in Cooper River Park. The Board awarded a contract for the improvements to Think Pavers Hardscaping, LLC, at its June board meeting to revitalize and reimagine the memorial.

The structure was initially unveiled in 2002 in the wake of the September 11 attacks, and has remained at its current location for nearly 20 years. In addition to the planned improvements, the memorial will be relocated in the park to a more prominent location near Jack Curtis Stadium.

“With the 20th anniversary of September 11 on the horizon, we began to consider how we could maintain and improve our memorial to victims of these senseless acts of evil,” said County Commissioner Jon Young. “We want to ensure that this remains a place where families can find peace, solemnity, and remembrance, where they can reflect and honor the lives of those we’ve lost. It should also be a place where our entire community can reflect and pay their respects to the thousands of their fellow Americans who were tragically taken from us.”

New to the memorial will be artifacts from three sites of the attacks on September, 11: a piece of steel from the World Trade Center in New York; a piece of wall from the Pentagon in Washington D.C.; and a sample of sand from the crash site of United Airlines Flight 93 in Shanksville, Pennsylvania, which crashed prior to reaching its target due to the heroic actions of passengers aboard the flight.

The updated memorial will also include space to add memorial plaques for future events.

“We unequivocally hope that space never gets filled,” Young said. “But we understand that some things are outside of our control. We want to make sure that if tragedy befalls our community, the families affected have a place where they can reflect and where they can see that their community supports them.”

The project is expected to be completed by October 2021, though this timeline could be impacted by weather and/or other unforeseen interruptions.