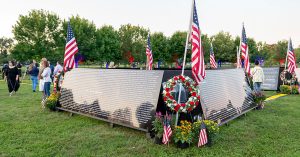 Commissioners Jonathan Young and Gold Star Mother, Melinda Kane, served as masters of ceremony for Camden County’s event to pay tribute to the sacrifices and service of thousands of Americans to mark the 20th anniversary of the terrorist attacks on Sept. 11, 2001. The Commissioners had a special recognition of the four county residents who died in the World Trade Center’s North Tower when it collapsed along with two first responders who were part of recovery efforts at Ground Zero and were affected by their service. There was also a special recognition of the 23 members of the United States Armed Forces from Camden County who died in the subsequent war on terror.

“A day that started with beautiful, severe blue skies ended with the most consequential loss of life from the deadliest foreign assault in U.S. history,” Kane said. “We witnessed the incomprehensible devastation from that day that will live – throughout our time and for generations to come – as the saddest day in our great nation. Our community was directly impacted- our family and friends lost loved ones, not just in the initial attack, but later from the heroic work of first responders at Ground Zero. Later, after 9-11, we lost local service members in the Global War on Terror, including my son Jeremy. This somber remembrance will allow us to honor all of those that were impacted to keep the memories of the victims, first responders and service members alive and hold them close to our hearts.”

The event’s featured speaker was retired New Jersey State Trooper and NBA Cares Ambassador Bob Delaney who has made multiple trips to Iraq and Afghanistan to visit service members and serves on the advisory board for the national nonprofit organization TAPS which provides resources and comfort for those grieving the death of a military loved one.