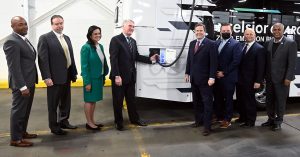 “Electric vehicles are the way of the future and having this electric bus charging infrastructure here in Camden City will allow us to utilize more sustainable means of public transportation and rely less on carbon emitting, traditional vehicles,” said Commissioner Nash, who also serves as the liaison to the county’s Environmental Commission. “We’re excited to have such a transformative initiative underway here in our city and we hope to be an example to other municipalities to show that investing in renewable energy will benefit our communities and our planet in the long run.”

The agency’s first eight battery electric buses will be deployed in Camden City later this year. Mayor Victor Carstarphen discussed his excitement to see this initiative underway in Camden City.

“I commend Governor Phil Murphy for helping reduce emissions not only in Camden but across New Jersey,” Carstarphen said. “I’m also grateful to Congressman Donald Norcross for advocating for sustainable initiatives and transformational projects that improve the quality of life for residents.  It makes me proud to know that NJ TRANSIT’s new electric bus charging stations at Newton Avenue Garage will be a first of its kind.  This is a huge step towards making NJ TRANSIT greener and it shows a strong commitment to not only being environmental responsibly to customers riding NJ TRANSIT buses but also to all those living in the surrounding area.”

The project in Camden will test electric buses in real world conditions on specific routes to provide invaluable data and information on the effects of weather, passenger volume, road and other factors on electric bus performance, including travel distance available between recharging.

The project will also review the infrastructure resources and work required to modernize bus garages to accept new charging stations and the greater power feeds needed to energize them.

“With the successful installation of the charging infrastructure at our Newton Avenue bus garage, which will support our eight electric buses arriving later this year, NJ TRANSIT celebrates a significant milestone on our roadmap to a 100% zero-emissions bus fleet,” said Kevin S. Corbett, NJ TRANSIT’s president and chief executive officer. “NJ TRANSIT’s Zero-Emissions Bus Program is aligned with Governor Murphy’s Energy Master Plan and we remain committed to achieving our goal of a fully zero-emissions bus fleet by 2040.”