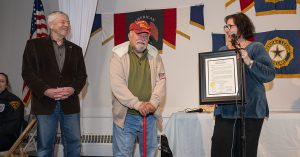 Commissioner Melinda Kane joined members of the American Legion Post 372 on Saturday, November 26th to honor Lt. Col. Al Bancroft, for his military service and his recent retirement from the Camden County Office of Veterans Affairs.

Bancroft joined the Marines in 1958, attending recruit training at Parris Island, South Carolina. After becoming a heavy equipment specialist, Bancroft completed three tours in Vietnam and was among the first Marines who landed in 1965.

When he returned to the U.S., he was a staff sergeant instructor at a Marine Corps engineering school. Throughout the years, Bancroft worked in Indiana, Virginia, California, North Carolina and after he retired from the Marines, he returned to Camden.

Bancroft continued to serve the military community, working as an officer with the Camden County Office of Veterans Affairs until his retirement in 2022.

“Al is a true patriot who has served his country for the better part of his life,” said Commissioner Melinda Kane, liaison to the Office of Veterans Affairs. “He has been fervently dedicated to his country and other veterans, putting them before himself. And for that, we are incredibly grateful. I’m thrilled to be able to honor Al for everything he’s contributed to Camden County over the years.”

During Saturday’s event, a local family of a deceased World War II veteran was reunited with his dog tag after a member of the Wiltshire Detectors Club recently found it in Wiltshire, England.