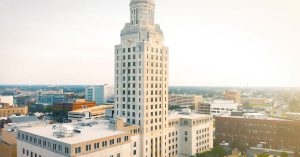 “The number of residents gainfully employed right now is record breaking in the city and the county,” said Camden County Commissioner Director Louis Cappelli, Jr.  “To think where we were as a community just two short years ago, from watching neighbors, friends and family members lose jobs during the pandemic to a tremendous resurgence of the job market over the last year. It’s hard to believe we are in this new normal.”

In 2017, Camden City was cited by the Federal Bureau of Labor Statistics as having the highest employment growth rate in the nation. The municipal economy was growing by leaps and bounds and providing opportunity and access to well-paying jobs by new and expanding companies. As it did nationally, the pandemic knocked the historic growth throughout the country off-track, but over the last year the county has seen businesses start to return to normal and significant growth over several sectors of employment.

Camden City Mayor Victor Carstarphen pointed to the increased investment in the city and the impact it has had on residents.

“The decreasing unemployment rate is a positive indicator that Camden has rebounded from the pandemic and is making tremendous progress,” Carstarphen said. “The city is consistently exceeding expectations, especially as it relates to our revitalization.  Thanks to local employment efforts by the eds and meds, corporate partners, the small business community, and non-profits, we are achieving record lows in unemployment.  These new employment opportunities are resulting in positive long-term outcomes for residents.  Camden is experiencing sustained growth and it’s been the result of extraordinary teamwork. All our partners are working collectively to improve the quality of life across Camden.”

More than 40 corporations have expanded their operations in Camden County since 2013 with the healthcare field being one of the fastest growing components of that growth. Both Jefferson Health in New Jersey and Virtua Health have built or renovated significant facilities over the last three years and this fall Cooper University Health Care announced a $2 billion expansion in Camden City that will create thousands of new jobs for our local workforce.

Christina M. Renna, president and CEO of the Chamber of Commerce Southern New Jersey, talked about the increased economic development throughout the county and in the city.

“We are seeing a lot of positive economic indicators in Camden County from residential expansion to new commercial and industrial growth that has added billions in new tax rateables,” Renna said. “In addition, this development has created more access and opportunity to new and existing jobs throughout the region creating a significant benefit to the local workforce. In short, the continued investments by private and public institutions have had a significant benefit to employment gains and labor growth.”

State Sen. Nilsa Cruz Perez talked about the opportunities and access created by the private and public investments into both the city and the county.

“We have a come a long way over the last 10 years from double digit unemployment rates to only having a little more than 5% of the workforce without work,” Cruz Perez continued. “This is incredible news and follows up on a period when Cooper University Health Care, the county’s largest employer, is investing $2 billion into the city which will fund thousands of new jobs. This continued investment will further build prosperity in the city and the region.”

To view all of the data go to www.nj.gov/labor/labormarketinformation/employment-wages/unemployment-rates-labor-force-estimates/.