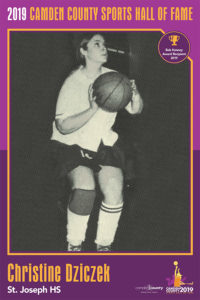 Chris Dzicek, this year’s Bob Kenney Award winner, grew up in the Fairview section of Camden in the 1960s. There were no organized sports for girls then, so the closest she got was when the family went to watch her brother John play baseball. “They were the only summer vacations we got, too” she added.“They did have basketball at St. Joseph’s High School, so I played basketball,” she explained. “They started girls’ softball then, so I played four years of softball and basketball. But there was no publicity about girls’ sports, so we didn’t get much support for softball other than a few parents. “Publicity, team rankings and all-league and all-group rankings came with Bob Kenney, sports editor of the Courier-Post,” Dziczek went on. “That is why this award means so much to me. He did so much for girls’ sports and he didn’t just talk the talk. He walked the walk, too. I also played for coach Bob Kenney and the Oaklyn Manor Bar adult women’s team some years later.”Chris also had a good role model in her older brother John. “He would also have a catch with me and never once said

Dziczek graduated from St. Joe’s in 1973 and went on to Slippery Rock State College in western Pennsylvania. “I played club softball there, but they told me I was too short for basketball,” she related. But she did get a degree in health and physical education and found a job with the Black Horse Pike Regional District in 1978. She was assigned to Highland High School. “I taught physical education and coached any sport that had an opening,” she noted. “My first sport was coaching cheerleading, but then I coached field hockey, softball and tennis. In 1999, I was appointed the athletic director at Highland.” She had also earned a master’s degree in Educational Administration from Rowan University. Chris must have done a good job, because the following year she was tapped as athletic director for the Black Horse Regional District. That included Triton and Timber Creek, as well as Highland. “It meant that I had to administer 57 sports, instead of 19, and cover two leagues,” she pointed out.

She also had to learn how to get along without regular dinners, especially with her growing involvement in helping high school sports in other ways. Dziczek started by getting together with other coaches and supporters to form the South Jersey Girls’ Softball Association. “We wanted to give recognition to softball athletes by recognizing the outstanding players, teams and coaches,” she noted. “Bob Kenney was active in that too.”

She was a member of the NJSIAA eligibility committee for 19 years and is still a member of the NJSIAA compliance committee. “We monitor schools to see that they are complying with NJSIAA rules and regulations,” Chris said. “It also means that I meet new athletic directors to explain those rules before they have a chance to inadvertently go astray.”

Dziczek has been a board member of the Camden County Sports Hall of Fame since 2014 and she has been a valued link to athletic directors and many coaches she has worked with during her career. She is also a friendly voice for female athletes.