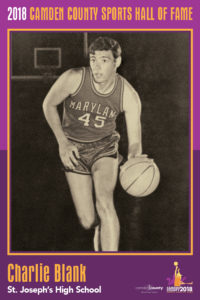 Charlie Blank first came to the attention of basketball insiders when he led coach Joe Koch’s Runnemede middle school to the finals of the Bishop Eustace Tournament. He was 6’4” then, well on his way to his eventual 6’8” height.

The following year he entered the tiny school of St. Joseph’s in Camden, which scheduled mighty Camden High and Woodrow Wilson among public schools and Eustace and Camden Catholic among the parochials. Blank played four years and led the Bisons to many victories under Tony Martin and Frank Tryka. He also collected many individual honors such as being a 1,000-point scorer, All-South Jersey first team and to the Courier-Post’s All-Century team for the Classic Era (1900-1968).

The Bisons waged some mighty wars during his tenure at St. Joe’s, especially with Bishop Eustace. St. Joe’s handed the Crusaders their only loss in 1968.
Blank served as captain of the three major sports teams, baseball and basketball plus the football team. He was a three-year letterman in baseball, in which he was named to the All-South Jersey first team for Coach Al Litwa’s Greater Camden League champions and a four-year letterman and second team All-Parochial team as a tight end in football.

But basketball was his best sport and he earned a scholarship to the University of Maryland, where he played for Hall of Fame coach Lefty Driesell. He led the freshman team in scoring and started for the national powerhouse team that won the NIT and was ranked #9 nationally in 1972. As evidence of his team-first play, he was elected captain and received the award for the senior who contributed the most to the program in 1973. Charlie also had the distinction of participating in the first Midnight Madness game in 1970, a contest that’s now a staple among Division One college teams.

Charlie then embarked on an outstanding teacher and coaching career. He has taught Marketing Education at Edgewood and Washington Township High Schools and was selected the New Jersey Marketing Education Teacher of the Year in 2001, the same year he was chosen Washington Township High’sTeacher of the Year. He is also an Honorary Lifetime Member of the New Jersey DECA program.

Blank has also compiled an extensive and outstanding coaching career, starting first as the University of Maryland’s JV basketball team. He also has the distinction of coaching the 1980 Edgewood High girls basketball team to a state basketball crown and Courier-Post Cup in 1980, which earned for him the South Jersey Coach of the Year Award from the Al Carino Basketball Club of South Jersey that same year.

“I really enjoyed coaching,” he says of his peripatetic coaching career. For his playing and coaching careers, Charlie Blank was elected to the Basketball Club of South Jersey Hall of Fame in 1990.