Celebrating the 100th Anniversary of the 19th Amendment 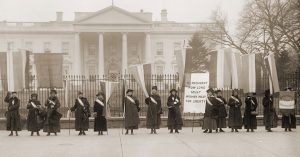 The statement below is from Freeholders Barbara Holcomb, Carmen Rodriguez, and Melinda Kane regarding the 100th anniversary of the 19th Amendment.

“One hundred years ago, the 19th Amendment was ratified giving women the right to vote. Today we celebrate the decades of protests and demonstrations organized by women who spent their lives fighting for women’s suffrage and which ultimately culminated in this historic achievement.

There could be no more fitting year to celebrate Susan B. Anthony, Alice Paul, Ida B. Wells, and all the women of the suffrage movement. Just a few months ago, we watched as a historic group of six women vied to be the presidential nominee of one of America’s major political parties, and this week, the Democratic party will nominate Kamala Harris as its vice-presidential candidate, making her just the fourth woman to ever appear on a presidential ticket.

This year has also been a stark reminder of how much further we have left to go to realize fully the values enshrined in our constitution. In a year where millions of Americans have taken to the streets to stand up for the rights of all people, we keep in our hearts and minds the lessons taught to us by our foremothers: that no battle is won by the righteousness of your cause alone, but by your willingness to sacrifice and labor for victory.”