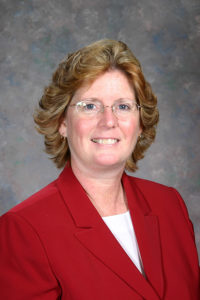 She will be honored during the college’s graduation ceremony on May 12th where she will be presented with a plaque, medal, and certificate from Camden County College President Donald A. Borden.

“Pat Fitzgerald is not just a tremendous example of the high quality of the graduates of Camden County College, she is also an enthusiastic advocate for the outstanding work we do here,” said Borden.

Since 2013, Fitzgerald has served as the Superintendent of CCTS.  Fitzgerald has worked in the school district for 30 years and served as principal of the district’s Pennsauken Campus from 2001 to 2013. She also served in the district as assistant principal, recruitment coordinator, adult evening school supervisor, cooperative education coordinator, and business technology teacher. In 1990, she was selected as “Teacher of the Year.”

Born in Camden and raised in Camden and Pennsauken, Fitzgerald received
her Master of Arts Degree and her Bachelor of Science Degree in Business Education from Montclair University, after earning her Associate in Applied Science Degree in Business Administration from Camden County College.  She holds several New Jersey certifications including School Administrator, Principal/Supervisor, and Teacher of Business.

Under Fitzgerald’s leadership, the Pennsauken Campus of CCTS was named one of the top high schools in the nation by US News and World Report several times, and was the only high school in the State of New Jersey to be named as a Distinguished School of Excellence by the USDOE and the NJDOE.  In addition, both campuses of CCTS have been recognized as National and New Jersey Schools of Character.

Fitzgerald is also a member of the Markeim Arts Center in Haddonfield and many of her photographs have been accepted for photography exhibitions.  In addition to enjoying photography in her free time, she enjoys spending time at the shore and writing.

Prior to joining the staff at CCTS, Fitzgerald worked as an associate editor of business-related textbooks at John Wiley & Sons in New York City.

Past recipients of Camden County College’s Distinguished Alumna/Alumnus Award include: