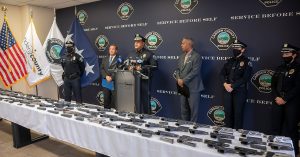 (Camden, NJ) – Over the last two years the CCPD has seen the proliferation of the untraceable ghost gun. This new tool for criminals comes without a serial number making it impossible to track its origin or its owners. And because ghost guns are sold without a background check or an age limit in several states anyone can buy them.

“Firearms in general, and ghost guns in particular, have always undermined the quality of life for residents in the city and have been the primary resource for criminals to sow the seeds of chaos,” Chief Gabriel Rodriguez said. “I want to commend the work of our men and women in uniform and the tremendous job they have done to get these weapons off the streets.”

To date, the CCPD has recovered 45 ghost guns in the city and will surpass last year’s total of 61. In contrast, in 2019, the agency recovered seven, meaning there is a growing trend in using these untraceable firearms in crimes throughout the nation. Furthermore, since 2016, according to the federal Bureau of Alcohol Tobacco Firearms and Explosives (ATF,) there has been a more than tenfold increase in the yearly total of ghost guns recovered by law enforcement in criminal investigations. In 2021 alone, there were approximately 20,000 suspected ghost guns reported to ATF as having been recovered by law enforcement in criminal investigations

“Our families deserve to be safe from senseless gun violence,” Congressman Donald Norcross said. “That’s why I helped pass the Safer Communities Act—the first gun safety bill to be signed into law in 30 years—and why I continue to fight in Congress for the resources local law enforcement officers need to keep our neighborhoods safe from dangerous and illegal ghost guns.”

As of October 24, the CCPD has recovered 311 firearms and is on track to surpass the 332 recovered all last year. In 2021, ghost guns made up almost 20% of the total firearms taken from suspects or found at crime scenes. In addition, according to the Johns Hopkins Center for Gun Violence Solutions, nationally, homicides involving a firearm increased 45% from 2019 to 2021.

“Too many lives have been lost at the hands of criminals with ghost guns and too many criminals have gone unpunished for carrying illegal guns,” said Camden City Mayor Victor Carstarphen. “The work that the CCPD is doing to get these guns off the streets is incredible and every day, these officers are making our community safer. We will continue this effort until our streets are devoid of these deadly weapons.”

In April, the Biden Administration announced new regulations surrounding the assembly and purchase of untraceable firearms, commonly known as ghost guns. Under this new legislation, anyone purchasing a kit to assemble one of these weapons would be required to undergo a background check, as is required for other kinds of firearm purchases. People selling these kits would also be required to include a serial number on the, so the firearm can be traced by law enforcement.

“The growth of guns that can be bought in pieces and sent to anyone’s front door is travesty for public safety here in Camden County and throughout the nation,” said Commissioner Director Louis Cappelli Jr. “I applaud the Biden Administration for making changes to the regulation of these guns, but more needs to be done in order to make our communities safer.”