CCPD Releases 2020 UCR Metrics for the City of Camden 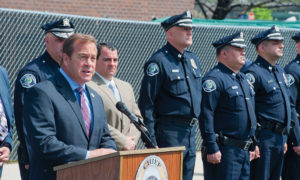 Last year, the city logged 2,796 total crimes compared to 10,724 in 1974, the first year we have on record for UCR data, marking a 73 percent reduction. Director of the Camden County Board of County Commissioners, Louis Cappelli Jr. talked about the improvements to the quality of life in the city and the commitment to community policing that has spearheaded much of the changes.

“God knows that 2020 was a year like no other, but with that said, the men and women of the department performed under the weight of so many challenges admirably,” Cappelli said. “The work they have done, hand in hand, with our community is truly remarkable. Our officers have been a key factor in everything from food distribution to handing out masks in the city and have been at the forefront of the pandemic response outside of their day to day guardianship in the neighborhoods. There is a reason we continue to make progress in our city that cuts against the grain of national trends in every urban area in America.”

Throughout the last year, several changes took place in the department from the promotion of a new chief to the statewide adoption of the agency’s use of force guideline that was nationally recognized. In addition, the department has continued to work on officer training coming up with innovative new methods to consistently enhance methods and strategies to policing in the city.

New Chief Gabriel Rodriguez, who was sworn in on the last day of 2020, talked about moving forward with the agency grounded in the tenets of partnership policing, mutual respect and the preservation of life.

“We saw solid progress made in 2020 and I’m looking forward to building on those gains that the chiefs prior to me have achieved,” Chief Rodriguez said. “I know that we cannot do anything without working in concert with our community and it will continue to be imperative for us to be partners with our residents and other institutions in the city. Furthermore, I also want to thank the officers working the beat who are the backbone of this agency and who make a difference in the city every day.”

Not only were homicides and shootings down, but reductions took place in rapes and robberies as well in 2020. Both categories of violent crime were down by double digits, with robberies falling 26 percent and sexual assaults coming down 18 percent.

Mayor Frank Moran talked about the overall improvements to the city that the department has made for children and families.

“This crime data underscores the tremendous progress we are making here in the City of Camden,” Moran said. “Camden continues to trend in the right direction, but the hard work is far from over.  Our community is now consistently realizing decreases in violent crime as we reach historic lows.  These public safety advancements are the result of collaboration, innovative technology and enlightened polices.  In addition, positive interactions and a concerted effort by police officers to build meaningful relationships with residents have begun to take hold.  I look forward to working with the Camden County Police Department and new Chief Gabe Rodriguez as we build upon these community policing efforts.”