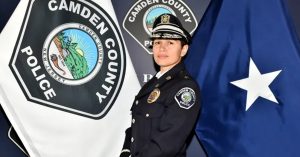 (Camden, NJ) – On Friday, the Camden County Police Department swore in the first Latina and woman to ever hold the rank of deputy chief in the history of law enforcement in Camden City. The Camden City, born and bred, police officer, Janell Simpson, has over 20 years of law enforcement experience and was sworn in as Deputy Chief by Commissioner Louis Cappelli Jr., Chief Gabe Rodriguez and Mayor Vic Carstarphen.

“Janell has served in a critical position at the Camden County Police Department over the last almost 10 years with the majority of that time focused on special victims,” Cappelli said. “Her dedication, compassion, hard work and undying love for the city and its residents has allowed her to help this department create a brighter future for Camden. We are incredibly grateful to have her and we’re eager to see all that she will accomplish moving forward in the top command of the agency.”

Chief Rodriguez talked about Simpson’s tenure with the department.

“Janell was my field training officer when I graduated from the academy and I couldn’t be prouder to swear her in as one of my deputy chiefs,” Rodriguez said. “I know her commitment to the community and I know she will continue to help us build a better agency as we move forward.”

“As Mayor, it makes me so proud that we are promoting Janell as the first Latina Deputy Chief in Camden’s history,” said Camden Mayor Victor Carstarphen.  “Her promotion is well deserved.  She is an incredible person, a dedicated officer and fully committed to the Camden community.  As our first Deputy Chief, Janell is shattering glass ceilings and will inspire other young ladies who wish to pursue a career in law enforcement.”

Deputy Chief Simpson said her love for the city of Camden is what’s kept her motivated in her law enforcement career.

“In everything I have done over the last 20 years, the love for my city was always in the forefront,” Simpson said. “I was born and raised here so to be able to serve and protect the community that made me who I am, it’s a constant motivator to continue with my career. I never imagined that I would make it this far, but I am overjoyed that this is a reality. I want to thank this city, its people and the Camden County Police Department for allowing me to achieve all that I have over the years.”

Janell I. Simpson currently serves as a deputy chief for the Camden County Police Department. She has spent over 20 years serving the residents of Camden City, in various roles in the agency since she began her career in law enforcement in 2002.

For the first three years of her tenure with CCPD, Simpson worked in the patrol division and then was assigned to supplemental patrol in the Community Policing Unit. Simpson earned the rank of detective in the Special Victims Unit, specifically working on missing persons cases. And although this assignment was difficult due to the nature of the cases, Simpson thrived and successfully reunited many missing individuals with their loved ones.

When the department became the Camden County Police Department in 2013, Simpson was promoted to sergeant of the Special Victims Unit, where she supervised the missing persons and juvenile bureau. In 2017, Simpson became the second Latina to earn the rank of Lieutenant in CCPD’s history and in January 2021, she was named Captain of the Internal Affairs Unit. After serving as the commander for General Investigations Unit, Simpson was promoted to her current position of deputy chief. She is the first Latina to ever attain the rank of captain and deputy chief in the history of law enforcement in Camden City.

Deputy Chief Simpson’s hard work and dedication to the force cannot be undermined. Simpson’s presence has aided in the progress this department has seen over the last nine years. And although she is proud of her achievements, Simpson remains humble, devoted to the residents of Camden and determined to continue to bridge the gap and build trust between the department and the community.