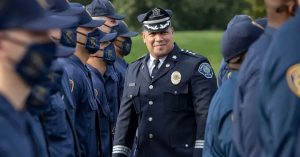 (Camden, NJ) – On May 1, 2013, the Board of Commissioners stood with then Gov. Chris Christie, state legislative leadership and command staff to swear in Chief Scott Thomson as the final officer prior to policing the streets of the city. Nine years later, crime has decreased dramatically, and the city has turned a significant corner in stabilizing neighborhoods and creating an ideal environment for residents and companies to invest in Camden. Now under the leadership of native son, Chief Gabriel Rodriguez, the agency continues to make progress in reducing crime and connecting with neighbors.

Comparing the final year of service for the former Camden City Police Department in 2012 to the last full year of operation of the Camden County Police Department in 2021, the difference is stark. Overall crime has fallen by 55%, total violent crime has fallen by 40% and homicides have dropped by 66%. Furthermore, shootings have been reduced by almost 50% since 2012.

During this current time period, where gun crimes and shootings continue to increase throughout nation, Camden City has only recorded four murders in 2022. Furthermore, shootings are down 35% from this same time last year in 2021, bucking a national trend that is plaguing other cities in the state and the country. In fact, today, the U.S. Center for Disease Control announced that gun-related homicides rose 35% throughout the nation. According to Johns Hopkins Center for Gun Violence Solutions, 2020 was the largest year over year rise in gun murders in the modern era of statistical recordings and 2021 initial data shows gun related deaths remain stubbornly high.

The first of May marked a period of time in 2013 that would change the trajectory of the city from a place that was beset by disinvestment, crime and poverty to a place where the President of the United States, Barack Obama, would eventually visit to mark progress made under the new law enforcement agency. In a short period of time, police officers were on foot, riding bikes and out of patrol vehicles, interacting and bridging a gap in the community that had become a significant rift over the years.

Commissioner Director Louis Cappelli Jr. talked about the benefits of the transition and the improvement to the quality of life in the city.

“We have made incredible progress over the last nine years by enhancing public safety and because of those improvements, we have seen a variety of positive changes take place throughout the city,” Cappelli said. “When we started this endeavor, Camden had a variety of severe challenges. Fast forward to now, and we have decreased murders to a level that has not been seen since 1985 and total crime to levels we haven’t seen since the 1960s.”

Measuring the transition from the previous nine years against the UCR data from 2012, the Camden County Police Department has had 20,165 less crime victims throughout the city’s 21 neighborhoods. Additionally, based on the 67 homicides that took place in 2012, there have been 321 fewer homicides over the last nine years.

Mayor Vic Carstarphen talked about the overall improvements to the city that the department has made for children and families.

“The Camden County Police Department has become a model for community policing across New Jersey and across the county,” Carstarphen said. “The historic lows in crime and improvements in public safety have played a key role in Camden’s transformation.  We are incredibly proud of our officers; they are role models for our youth and leaders in our community. These officers and the leadership of the CCPD have helped make our neighborhoods safe, they have earned the trust of our residents and they remain committed to the mission of improving the quality of life in Camden.”

Since the county police department was established nine years ago the city has experienced unprecedented private and public investment from new corporate campuses to academic buildings. Furthermore, according to the U.S. Census Bureau the poverty rate has decreased, unemployment is down to 7.5%, the job rate growth led the nation in 2017 and the high school dropout rate has been cut in half since 2013. After 50 years of disinvestment and disenfranchisement, starting in 1967 with the closing of the New York Shipbuilding Corporation, Camden has been incrementally moving forward and becoming a beacon of hope and change for in the region.

“This agency continues to focus our efforts on unity policing, working hand and hand with members of our community,” Chief Gabriel Rodriguez said. “Looking back, we have made significant progress on a variety of different fronts by creating safe spaces and building bonds throughout the city. That said, we still have miles to go and promises to keep, but make no mistake, the transition has had an outsized impact on our residents and families by reducing the level of trauma in the city and increasing the health and welfare of our children and families.”