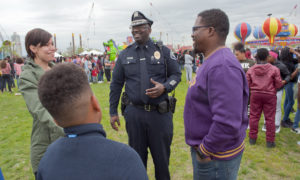 (Camden, NJ) – On May 1, 2013, the Board of Freeholders stood with Gov. Chris Christie, state legislative leadership and command staff to swear in Chief Scott Thomson as the final officer prior to policing the streets of the city. Five years later crime is down and the city has turned a significant corner in stabilizing neighborhoods and creating an ideal environment for residents and companies to reinvest in Camden.

The first of May marked a period of time in 2013 that would change the trajectory of the city from a place that was beset by disinvestment, crime and poverty to a place where the President of the United States would eventually come to visit to mark progress made under the new law enforcement agency. In a short period of time, police officers were on foot, bike, and out of patrol vehicles, interacting and bridging a gap in the community that had grown over the decades.

Freeholder Director Louis Cappelli Jr. talked about the benefits of the transition and the improvement to the quality of life in the city.

“We have made incredible progress over the last five years by enhancing public safety and because of those improvements we have seen a variety of positive changes take place throughout the city,” Cappelli said. “When we started this endeavor, Camden had a variety of severe challenges and now we have decreased murders to a level that has not been seen since 1985 and total crime to levels we haven’t seen since the 1960s.”

Mayor Frank Moran, who played a critical role as the leader of city council, five years ago talked about the overall improvements to the city that the department has made for children and families.

“I commend the men and women of the Camden County Police Department for their extraordinary commitment to our city and for making Camden a much safer community than it was five years ago,” Moran said. “The community policing model is clearly working as crime is at its lowest level in over four decades. Officers are fully engaged with residents as they are reading to children in schools and hosting neighborhood barbeques. Our children are now playing freely in the parks and residents are no longer confined to their homes. Residents are confident in the CCPD and that’s a sign of real progress. I only expect public safety to continue to improve as the future looks very bright for Camden.”

Since the county police department was stood up five years ago the city has experienced unprecedented private and public investment from new corporate campuses to academic buildings. Furthermore, according to the U.S. Census Bureau the poverty rate has decreased by 20 percent, the job rate growth led the nation in 2017 and the high school dropout rate has been cut in half since 2013. After 50 years of disinvestment and disenfranchisement, starting in 1967 with the closing of the New York Shipbuilding Corporation, Camden has been incrementally moving forward and becoming a beacon of hope and change for the region.

“Our agency continues to provide the guardianship that our community needs to feel safe when they go to the park or the corner store,” Chief Scott Thomson said. “Looking back, we have made significant progress on a variety of different fronts by creating safe spaces and building bonds throughout the city. That said, we still have miles to go and promises to keep, but make no mistake, the transition has had an outsized impact on our residents by reducing the level of trauma in the city and increasing the health and welfare of our children and families.”