CCMUA’s Kricun Named Government Engineer of the Year by ASCE 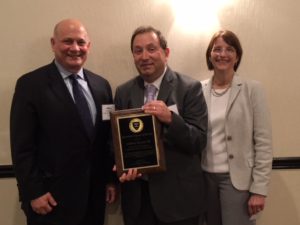 (Camden, NJ) – The New Jersey chapter of the American Society of Civil Engineers (ASCE) named Andrew Kricun, Executive Director of the Camden County Municipal Utilities Authority (CCMUA) the Government Engineer of the Year during their Annual awards dinner held on May 4 in Woodbridge. The award is presented to an outstanding civil engineer in government service who has contributed substantially to their profession.

“Andy is truly deserving of this award,” said Freeholder Jeffrey Nash, liaison to the CCMUA.  “He is someone that constantly goes above and beyond the call of duty, both in his official capacity overseeing operations at the CCMUA, and in taking on projects such as creating rain gardens and new parks through Camden to improve the quality of life for the city’s residents.”

As the Executive Director of the Camden County Municipal Utility Authority, Kricun has improved water quality and promoted sustainability throughout Southern New Jersey. During his tenure at the CCMUA, water quality performance has markedly improved while residential rates have remained consistent.

In September, the CCMUA went “off the grid” to become 100 percent independent of energy supplied by the electricity grid. The total energy independence reduces the CCMUA’s vulnerability to power outages, ensures reliability during a natural disaster and cuts hundreds of thousands of dollars in electrical costs.

The CCMUA has been nationally recognized by the U.S. Environmental Protection Agency for their commitment to clean water and healthy waterways. Last year, Kricun, testified at the U.S. Senate Committee on Environment and Public Works’ Subcommittee on Fisheries, Water, and Wildlife on the need to fund improvements to the nation’s aging water infrastructure.