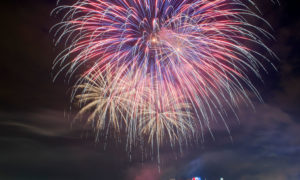 (Camden, NJ) – The annual Freedom Festival and Fourth of July Fireworks Spectacular will be held at Wiggins Waterfront Park presented by the Freeholder Board and the City of Camden. The festival is set to run from 5:00 to 9:30 p.m. on Wednesday, July 4, and will include concerts, a salute to our veterans and the region’s largest fireworks display over the Delaware River.

“We expect more than 150,000 visitors to Wiggins Waterfront Park this summer for events ranging from great entertainment like the Fourth of July concert and fireworks and Sunset Jazz Series to events such as the South Jersey Caribbean Festival and Camden River Day,” said Freeholder Ed McDonnell, liaison to the Camden County Department of Events and Community Outreach. “We invite everyone to come out to the Camden Waterfront for a day filled with music, food, fireworks and patriotic fun for the entire family.”

The Independence Day festivities kick-off at 5:00 p.m. with salute to America and our Veterans presented by the Tri-County Symphonic Band. At 6:30 p.m., the fabulous Spinners take the RiverStage. This super-group brought us chart topping hits such as “It’s a Shame,” “I’ll be around,” and “Games People Play.” At 8:00 p.m., the incomparable Eddie Money fills the night with music. Eddie Money’s decade-spanning career produced classic rock anthems including “Take Me Home Tonight,” “Two Tickets to Paradise,” and “Baby Hold On.” At 9:30 p.m., the show heads to the sky with a Fireworks Spectacular over the Delaware River.

For adults, the festival will also feature a beer garden featuring Tonewood Brewing of Oaklyn.

Wiggins Waterfront Park is located at Riverside Drive and Dr. Martin Luther King Boulevard in Camden.  The event is made possible through a joint partnership between the Camden County Freeholder Board, City of Camden, Coopers Ferry Partnership, City of Camden Parking Authority, WMGK 102.9FM and Serpico Pyrotechnics, LLC.

As always, the Camden County Department of Public Safety reminds all Camden County residents that the 911 system is for emergency calls only. The county’s dispatchers are not able to inform residents of the locations and times of fireworks displays in their area.