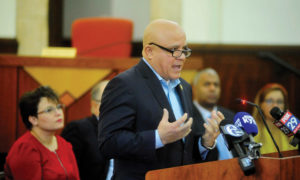 (Camden, NJ) – Local, county, and state officials gathered today in an effort to call to attention to the humanitarian crisis in Puerto Rico. For weeks, the island has been hit by earthquakes and aftershocks which have damaged and destroyed homes and other critical infrastructure. Officials called on the public to support recovery efforts however they could and offered information on organizations spearheading the recovery.

“By recent estimates, there are currently as many as 4,000 U.S. citizens in Puerto Rico living in temporary shelter because their home has been destroyed, damaged, or deemed unsafe for occupancy,” said Freeholder Carmen Rodriguez. “Many families in our community have relatives on the island, and many were still recovering from Hurricane Maria before these recent disasters. Our fellow citizens in Puerto Rico need our support now more than ever.”

Officials in the city and statewide have been working with relief agencies like the American Red Cross, Salvation Army, and others, to follow developing news and to identify opportunities for donations and other contributions. In recent days, a continuation of strong earthquakes and flooding caused by heavy rain has made recovery even more difficult.

“We have been in contact with relief agencies both in the United States and on the ground in Puerto Rico, and we are focused on ensuring that public relief is funneled into the appropriate agencies where it will reach the people of Puerto Rico,” said State Senator Nilsa Cruz-Perez. “This is a developing crisis that has only gotten worse with each passing day, our fellow citizens need us in Puerto Rico, and we have no choice but to answer that call.”

Many of the officials in attendance recently joined Senator Bob Menendez in calling for additional hearings on the Department of Housing and Urban Development’s failure to disburse congressionally appropriated aid for Puerto Rico.

“It is all about helping those in need,” Moran said.  “As a Camden resident of Puerto Rican heritage, I am compelled to take action.  The impact is felt not only on the island but right here in Camden as many of our residents have family ties to Puerto Rico.  It is heart wrenching to see friends and family suffer as a result of inability to access critical funding.”

Congressman Donald Norcross highlighted the need for federal funding to flow to the island, and the role New Jersey has played in support efforts thus far.

“The people of Puerto Rico are facing a dire situation in the aftermath of the recent devastating earthquakes,” Norcross said. “Our fellow Americans need our help, and New Jersey is stepping up. I urge the Trump Administration to do the same by releasing all of the funds appropriated by Congress in 2018 for disaster relief in Puerto Rico. We must provide immediate assistance, so the recovery process can begin, and a pathway to a vibrant future can be paved.”

Individuals interested in supporting relief efforts can donate through the New Jersey for Puerto Rico Relief, a nonprofit established in New Jersey to support the people of Puerto Rico following Hurricane Maria in 2017, which works with relief agencies on the ground in Puerto Rico. Visit www.nj4pr.com for more information, or email donate@nj4pr.com.