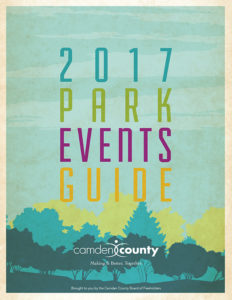 “We expect over 150,000 visitors to the Camden Waterfront this summer for events ranging from great entertainment like the Fourth of July Fireworks and Sunset Jazz Series,” said Freeholder Ed McDonnell, liaison to the Camden County Division of Special Events.  “Bring a lawn chair or a blanket and join us for these great free concerts.”

Celebrate Independence Day this year at the Camden County Freedom Festival at Wiggins Waterfront Park featuring WAR plus special guests Cherry Poppin’ Daddies followed by fireworks over the Delaware. WAR traces its roots to San Francisco in 1969 with chart toppers including “Spill the Wine”, “Why Can’t We Be Friends?” and “Low Rider”.  The Daddies unique blend of swing, ska and jazz has propelled this band for more than 25 years and gave us the modern swing hit “Zoot Suit Riot”.  They take at stage at 6:30 p.m., followed by WAR at 8 p.m. before a fireworks spectacular at 9:30 p.m.

“All of this entertainment and more can be found in the 2017 Camden County Park Events Guide that will begin arriving in mailboxes later this month,” McDonnell said. “In the guide you will find all the information your family need to plan a great summer with entertainment that’s hard to beat. In addition to concerts, there are festivals, sporting events, programs for individuals with disabilities and much more.”

Headlining this year’s Classic Car Show and Concert in Lindenwold Park is the legendary Blue Notes, the group that helped create the Sound of Philadelphia with their hits “Bad Luck”, “If you don’t know me by Now”, “The Love I Lost” and many more.

“Be sure to join us at our newest concert series at New Brooklyn Park in Winslow Township.” McDonnell said. “This is a great new venue where we will host several entertaining concerts that will appeal to every member of your family.”

Sunset Jazz Series at Wiggins Waterfront Park
At the foot of MLK Boulevard, Camden City
All concerts start at 8 p.m.