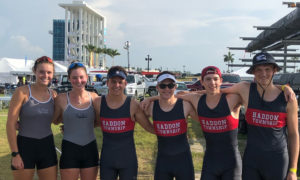 (Pennsauken, NJ) – Youth rowers from Camden County made waves last month as they took top spots in national and international races, and became the second crew from the Camden County Boathouse to ever race overseas.

From June 18 to 23, the South Jersey Rowing Club (SJRC), which calls the Boathouse home, sent its women’s double racing team to Henley, England, for the Henley Women’s Regatta on the Thames River. After qualifying for the final, seeded first out of 32 boats, SJRC’s duo placed second in the race against rowers from across the world.

“To go all that way, against that competition, and finish second place is an incredible accomplishment that these girls, and all of us, should be proud of,” said Freeholder Director Louis Cappelli, Jr. “We have put a lot of effort into making the Cooper River a premiere racing and training destination for the county’s athletes. To put a team onto an international podium just confirms the top tier status of our resources here in Camden County, and reaffirms why we developed the boathouse in the first place.”

The second-place women’s duo was propelled by two collegebound seniors from local high schools. Regan McDonnell is a senior at Haddonfield High School who will be rowing at Stanford next year, and Elle Caton is a senior at West Chester High School who will be rowing at University of Michigan in the fall. McDonnell and Caton also placed fifth at the National Championship in Sarasota, Florida, on June 9.

Also in Florida, the boy’s quad from Haddon Township, placed fifth in their respective race. That group was comprised of juniors Jack Haigh, Nick Perks, and Jack Savell, along with senior Vince Fitzpatrick who will be rowing at Temple University next year.