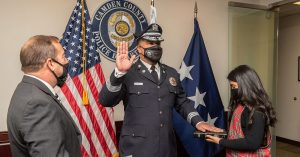 (Camden, NJ) – Director of the Board of County Commissioners, Louis Cappelli Jr., has sworn in Chief Gabriel Rodriguez to the top position at the Camden County Police Department. He becomes the third leader of the department over the last eight years and was born and bred in the city, growing up in the Peter J. McGuire Gardens. Rodriguez, who rose through the ranks to become Chief of Police, will focus on enhancing the quality of life for residents while continuing to work hand and hand with the community.

Cappelli talked about the credentials of the new top cop and praised the chief’s focus on continuing to build a strong partnership with the residents of Camden.

“Gabe has been an asset to our department and the city for years and has worked in every facet of it throughout his tenure,” Cappelli said.  “He knows that bridges need to continue to be built and that engagement in the neighborhoods is imperative for us to reduce crime. Furthermore, he knows that a united approach, particularly one focused on building trust, is vital to our success in protecting the health and welfare of our residents.”

Rodriguez is a native of East Camden, growing up in the Marlton neighborhood, and has been a police officer in the city for more than 18 years, having joined the former Camden City Police Department in January 2003. He holds a bachelor’s degree in Science for Individualized studies from Fairleigh Dickinson University.

As an officer with the former city police department, he served in patrol from 2003 to 2006 and then in the Community Policing Unit from 2006 to 2008. In 2008 he was assigned to the Violent Crimes Task Force, Strategic Multi-Agency Shooting and Homicide Team as a detective. In 2013, he joined the Camden County Police Department as a sergeant. He has served as a supervisor in multiple areas within the Operations Bureau, Community Safety Team and in the Real-Time Tactical Operational Intelligence Center. He was the commander of Strategic Deployment, Executive Protection and NRT Central units.

Rodriguez called the promotion an honor and said he is prepared to guide the department into the future with his command staff.

“I’m looking forward to leading this agency and continuing to work alongside some of the most talented men and women in law enforcement. The work each officer has done over the last eight years has changed the city and made it a better place to live, work and raise a family,” Rodriguez said. “Today, Camden is a different place than it was 10 years ago, and my vision is to work with everyone in the city to continue the progress we’ve made in this effort and build on the foundation that was laid before me.”

Camden City will finish 2020 with fewer than 3,000 total crimes bringing the number of total crime victims to a place it has not been in more than 50 years. The homicide rate has been reduced to levels not seen since the early 1980s and the city’s solve rate for homicides is over 90 percent this year.

“I want to congratulate Chief Rodriguez on his new appointment and I look forward to working with Gabe as we strengthen Camden’s public safety efforts into the future,” said City of Camden Mayor Frank Moran. “I have known Gabe Rodriguez for many years and it brings me great pride as he becomes Camden’s first Latino police chief. Gabe is an honorable public servant who has worked tirelessly to earn the respect of our citizens. Chief Rodriguez is from East Camden and understands the unique challenges facing the Camden community.  I am confident in his extensive policing experience, confident in his capability to unite the community, and confident in his exceptional leadership ability. Rest assured, Chief Rodriguez will continue to advance public safety while keeping the needs of our residents at the forefront.”

Congressman Donald Norcross touched on Chief Rodriguez’s prior work in the agency and his extensive experience working with the community.

“Gabe has been an outstanding member of our local law enforcement community for nearly two decades, and his wide-ranging experience has prepared him to lead the department,” Norcross said. “As a Camden native, he understands the importance of building relationships and trust to provide public safety, and he will continue to employ Camden’s nationally-recognized community policing model to protect and serve the residents of South Jersey.”