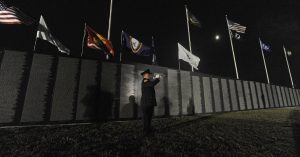 (Gloucester Township, NJ) – Each year, Americans observe March 29, Vietnam War Veterans Day, to thank and honor the nation’s Vietnam veterans and their families for their service and sacrifice.

In recognition of the day, County Commissioner Melinda Kane, liaison to the Office of Veterans Affairs and Gold Star Mother, thanked Camden County’s veterans and their families on behalf of the Commissioner Board.

“Today, we honor and thank the men and women who served the United States during this decades-long conflict, as well as their families who endured and sacrificed in the name of their fellow citizens,” Kane said. “Unlike in previous wars and conflicts, the majority of Vietnam War veterans returned home to no thanks or applause. We have spent many years attempting to correct this tremendous wrong and will continue to do so in the coming years. Anyone who chooses to serve this country is a hero and a patriot and should be treated as such when they return home.”

In 2019, the Commissioner Board held a special four-day commemorative event in recognition of the 50th Anniversary of the Vietnam War. The program included a replica of the Vietnam Memorial on Veterans Island at Cooper River Park, and an anniversary commemoration and medal ceremony for Vietnam veterans.