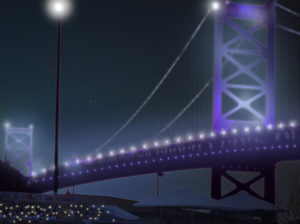 (Camden, NJ) – The Camden skyline will be bathed in purple light to mark Overdose Awareness Day on August 31. The Camden County Courthouse/City Hall building, the Governor James J. Florio Center for Public Service and the Ben Franklin Bridge will be lit purple.

“Some of the most recognizable structures that make up the Camden skyline will take part in this observance,” said Freeholder Director Louis Cappelli, Jr., liaison to the Camden County Addiction Awareness Task Force. “These buildings and the bridge will serve as a visual representation to raise awareness to opioid epidemic in order to save lives and reduce stigma.”

Camden County employees have been encouraged to wear purple Thursday and meet for a moment of silence at 1:42 p.m. in Camden’s Roosevelt Plaza adjacent to City Hall. According to the CDC, there are more than 142 lives lost to overdose each day.

Heroin and opiates have become a growing public safety and health crisis creating devastating effects on the region, the state and the nation in the last five years. These narcotics are ubiquitous in every community in Camden County and usage has become a public health crisis. To address the epidemic, the Freeholder Board created the Camden County Addiction Awareness Task Force.

“The task force is made up of students, parents, teachers, civic organizations, medical professionals, public health providers, law enforcement and religious leaders – just to name a few” Cappelli said. “We did not limit who comprises the task force since this is an issue that touches every aspect of our community.”

“The task force members serve as liaisons to state and local community awareness groups as well as non-profit groups and drug addiction service providers,” Cappelli said.  “As an elected official opiate addiction is one of my biggest concerns.

Since its inception, the Addiction Awareness Task Force has distributed over 30,000 pieces of educational literature throughout the county, held community awareness and educational events with over 10,000 attendees, and worked with local law enforcement to expand access to medication drop boxes. In addition, the task force’s Narcan/naloxone training program has equipped residents with overdose prevention kits, and provided every law enforcement agency in Camden County with Narcan, resulting in hundreds of Narcan saves countywide. In addition, the county has created a new Office of Mental Health and Addiction and commissioned a treatment program called Operation SAL.

To get help for you or a loved one, contact the Camden County Office of Mental Health and Addiction at addictions.camdencounty.com or 877-266-8222.