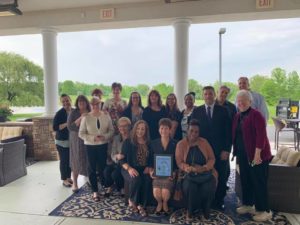 The honor is awarded annually to an individual who exemplifies the spirit of its namesake and works for the benefit of children and families throughout New Jersey and the United States. Minster received the award on Friday, May 17, at the NJECE annual symposium and luncheon.

“This award is reserved for the most impactful public servants who work to better the lives of children and families in our state, and this year’s recipient surpasses that standard as much as anyone who has ever received this award,” said Freeholder Carmen Rodriquez, liaison to the Department of Children’s Services. “The Freeholder Board expresses its incredible gratitude for Donna’s hard work, passion, and commitment to the families and children of our communities.”

Minster has spent nearly 25 years working within the Department, and has spent her life advocating for early childhood programs and positive experiences for children of all ages. She has sat on numerous local child care advocacy boards, serviced as the Executive Director of MLK, Jr. Child Care Centers, and previously worked as an elementary school teacher in the Diocese of Camden. Tens of thousands of Camden County children have benefitted from her hard work and stewardship.

The Award is presented in honor of Aletha Wright (1949-1994), a former Camden County Freeholder and lifelong advocate on behalf of children and families. Wright was a charter member of the Child Care Advisory Council and represented the Department of Human Services and the Division of Youth and Family Services during her appointment as Director of the Department’s Office of Child Care Development. She later became Assistant Director in the Division of Family Development and worked in the Office of Policy and Planning in the Governor’s Office. She was elected to the Freeholder Board in 1993.

“Aletha Wright was a dedicated advocate and a tireless ally of children and families everywhere,” Rodriquez said. “To have your name held up in comparison with her legacy is an incredible honor, and it is one that Donna absolutely deserves.”

The Child Care Advisory Council (1983-2008) presented the Aletha Wright Award at its annual luncheon from 1999 until 2008. The New Jersey Early Care and Education Alliance resumed presentation of the award in 2011. For more information regarding the Aletha Wright Award, please visithttp://njecealliance.org/aletharwrightaward.htm.