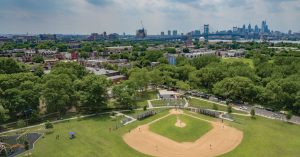 The plan was created by the Trust for Public Land and Camden Community Partnership Inc. in collaboration with the city, the county and the county Municipal Utilities Authority. The Parks Plan balances the lived experiences of Camden residents with data while enabling the development of the following objectives:

“The importance of parks, greenspace and constructing these places for our community is vital to the health and welfare of our residents,” said Commissioner Jeff Nash, liaison to the Camden County Parks Department. “This plan is a vision and road map to ensure that we build the best park system the state has to offer right here in Camden City.”

Safe and walkable parks are an integral part of healthy, connected, and equitable cities, but systemic barriers prevent their usage, with 7% of residents reported that they don’t use parks at all. Further, health data for Camden shows extremely high adult obesity rates, with some neighborhoods reporting rates of 49% when compared to 30% nationally. The Covid‐19 pandemic has also intensified the importance of having accessible park space where people can safely connect with friends and family while physically distancing.

Owen Franklin, state director for the Trust for Public Land, said the collaborative effort will make positive change in Camden.

“Camden residents, nonprofits, public officials, and private sector leaders are all prioritizing the critical role that parks serve in connecting and strengthening Camden’s great neighborhoods,” Franklin said. “We are thrilled that this plan will provide clear direction for where attention is most needed, so that we can collaborate on real, sustained, and profound impact in the City.”

Prioritizing investments in Camden’s public spaces will support mental and physical health, help minimize coastal riverine flooding, enhance workforce development, and build community capacity for park maintenance and improvement. The plan will help guide an anticipated $25 million in investments by 2035 and maintenance efforts for the $100 million invested in parks over the last 10 years.

Dana Redd, chair of the Camden Community Partnership, said the plan will aid in the revitalization of Camden City.

“We are proud that so many resident voices were involved in the process to create the Camden Parks and Open Space Plan,” Redd said. “The Plan expresses their vision for vibrant parks and open spaces that are the center of civic life and renewal in Camden communities.”

Spatial and survey analyses conducted during the 12‐month planning process revealed that 97% of Camden residents live within a 10‐minute walk of a park but only 31% reported visiting a park more than once per week. Many residents also cited, among other things, the need for improved safety, better equipment and better maintenance as barriers for use.

Camden City Mayor Victor Carstarphen said that his administration and their community partners are determined to improve parks and open spaces for residents.

“The City of Camden is committed to making the Camden Parks and Open Space Plan a reality and ensuring that all Camden residents have access to quality, maintained, and vibrant open spaces,” Carstarphen said.

Mike Brennan, chairman of the CCMUA, said he and the authority is excited to have a hand in the Parks Plan.

“Codifying and finalizing a long‐term vision that puts residents first for parks and recreation in the city is the foundation of good public policy,” Brennan said. “The authority is looking forward to working with our partners and the community to enhance and improve open space and park land throughout the city.”