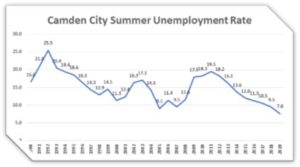 (Camden, NJ) – The City of Camden met a series of employment milestones in past months, including its best summer in roughly 30 years, based on preliminary data released last week by the New Jersey Department of Labor and Workforce Development (DLWD). The city’s summer unemployment rate reached a record 7.6% in 2019, beating the previous low of 9.1% set in 2005.

In addition to record-low unemployment in the summer, August capped off record lows in 6-month (7.5%) and 18-month (8.4%) average unemployment, besting any such periods since 1990, the earliest year of record available from the DLWD.

“These results do not happen overnight, and they do not happen by accident,” said Freeholder Jonathan Young, liaison to the Camden County Department of Labor and Workforce Development. “Sustaining unemployment levels like this, when you compare them to where the City was just a few years ago, requires a comprehensive, city-wide effort to improve the availability of job opportunities for residents in the City. This latest data release adds to the already extensive body of evidence showing Camden’s continued growth, and the impact that development in the City has had on jobs and employment.”

“We are still working to expand access to quality jobs and to reduce the disparities between the City and the state,” Young said. “But, you cannot ignore the context of these accomplishments. For five months, Camden has maintained what was a record just one year ago. We are starting to see the true impacts of the generational investments made in the City by companies large and small.”

Additional measurements make evident that the City’s success is the product of systematic changes, as opposed to sudden and brief fluctuations. August marked the end of record lows in 6-month and 18-month unemployment. Over the same six-month stretch, from March to August, in 2012, the average unemployment rate was 16.1%, compared to this year’s 7.5%. The highest mark on record for any six-month period was 24.8% from May to October 1992.

Kris Kolluri, CEO of Cooper’s Ferry Partnership, highlighted the positions still waiting to be filled by employers in the City.

“There are still hundreds of openings across dozens of companies and industries listed on our web-based jobs portal for Camden residents,” Kolluri said. “Given the availability of so many more jobs in the City, we have no doubt that these positive long- and short-term trends will continue as residents are connected with new employers. The influx of business development to the City over the past five years has completely transformed the economic landscape in Camden.”

“These numbers are indicators and indisputable proof that Camden is headed in the right direction,” Moran said.  “The City’s unemployment continues to improve and more importantly the rate is being sustained over an extended period of time.  This progress is due to collaboration and a tremendous effort at all levels of government.  Camden has put together a strategy that has focuses on improving public safety, advancing quality education and fostering an environment that supports economic growth.  Clearly that strategy is working as our residents are realizing meaningful job opportunities.  Individuals are now obtaining quality jobs with top notch businesses and that was not the case a few years ago.”

Mayor Moran continued by highlighting the City’s determination to continue setting records and achieving milestones that benefit its residents.

“Camden is finally overcoming decades of disinvestment that have ravaged our community, but our City is now at a critical tipping point and our residents, businesses and community stakeholders simply cannot afford to reserve direction,” Moran said. “I can confidently say, Camden is determined to keep up the collective efforts, keep up the hard work and sustain this progress for years to come.”