Busiest Regatta Season to Date on the Cooper River 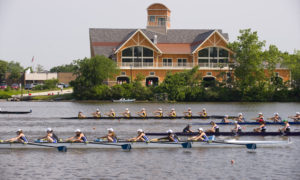 (Pennsauken, NJ) – The regatta season on the Cooper River may be half over, but some of the best competition is just heating up beginning May 5.

“This year the Cooper River is playing host to more than 15 regattas, making this our busiest rowing season ever,” said Freeholder Jeff Nash, liaison to the Camden County Parks Department. “The Cooper River, one of the county’s largest economic engines, finalized an underwater makeover last year that has paid off by attracting some of the largest national rowing events in the country.”

The dredging project has removed more than 115,000 cubic yards of sediment from the river bed. This enhanced the rowing course by deepening the previously shallow sixth lane, while creating a significant environmental benefit to the water quality. On average, the depth of the course has been increased by between five and six feet to accommodate large scale competition and create full access to the width of the river.

“Having the ability and capacity to host some of the largest rowing events in the nation is a recreational and economic benefit to Camden County,” Nash said. “This body of water is a special place for rowers and outdoor enthusiasts throughout our region and generates countless dividends for residents, businesses and the overall community by drawing competitors from throughout the nation. The improvements to the park have created a real sense of place for residents and a destination for rowers.”

Upcoming Regattas on the Cooper River include:

For the complete regatta schedule and more information, visit www.camdencounty.com.