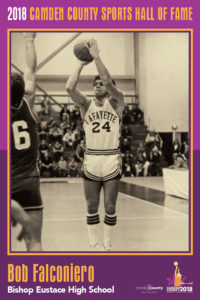 Bob Falconiero was an outstanding basketball player in the Delaware Valley area. It all started in grammer school where he scored over 1000 points in 8th grade and continued that pace at Bishop Eustace High School and Lafayette College. Bob had a tryout with the Indiana Pacers and an offer to play pro ball in Italy, but declined both and decided to go into the field of medicine. Bob became one of the best orthopedic surgeons in the country. His great basketball ability was evident at elementary level where he was a scoring machine. Basketball became his life through high school where he started on three state championship teams at Bishop Eustace, where he was all parochial state tournament 1st team (76), all parochial south jersey 1st team and all South Jersey 2nd team, captain and mvp (76).

He was also a scholar/athlete (gpa3.5). He played for the great coach Pete Johnston and was inducted into the be hall of fame and the Carino Club of SJ Hall of Fame. He continued his brilliant career at Lafayette College where he was a four year varsity, three year starter, and 1000 point scorer. His college honors included MVP Rutgers Classic Holiday Tournament, MVP,  captain and academic All-American in senior year 1980. East coast conference 1st team. Bob led team in scoring, assists and ft% in 1979 & 1980 ,was also ecac player of the week three times in 1980. He graduated Lafayette College as all time assist leader (372), all time leader ft% (83.9) and scholar athlete. For his basketball leadership, he was inducted into the Lafayette Hall of Fame.

Bob brought his skills on the court to the art of coaching at his alma mater.  He starts his. 13th season this year at bishop eustace  with a record 213 wins in the last 12 years including championships in the Florence Holiday Tournament, KSA Disney National Tournament, two Olympic Conferences and selected to coach the Carino Club all star game. Bob took his coaching abilities to the AAU level for many years for the boys and the past three years for the Philadelphia Belles Girls AAU, winning many championships at this level while assisting many athletes to play in college.

His love for basketball graduated into the world of medicine where he has become the president of  the National Acadamy of Osteopathic Orthopedic Surgeons  in 2006, President of Orthopedic sports medicine society and assistant team physician for the Philadelphia Eagles and the Flyers. Bob also served as team physician for Bishop Eustace, Camden Catholic, Holy Cross and other South Jersey high schools for over twenty years. He has treated thousands of athletes over twenty seven years as an orthopedic surgeon. He lives in Moorestown,NJ. His wife Debbie and their three children are delighted that he’s being honored tonight.