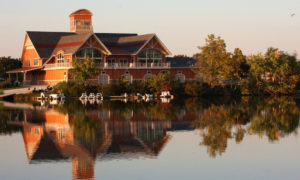 (Cherry Hill, NJ) – The Camden County Boathouse has been chosen to host the 2023 NCAA Divisions I, II, and III Women’s Rowing Championships. The announcement was made on Oct. 14, by the National Collegiate Athletic Association (NCAA).

The event is one of five NCAA championships awarded to the Philadelphia region this bid cycle, including:

“We are honored to be hosting the 2023 NCAA Women’s Rowing Championships at one of the nation’s finest rowing venues,” said Freeholder Jeff Nash, liaison to the Camden County Parks Department. “Cooper River Park has evolved and grown into an elite rowing course with the best straight away lanes in the country and very little current. We are looking forward to having athletes, teams and families come and stay with us for this momentous event and accommodating the top rowers competing at the highest levels in the United States.”

The Championships will take place over a three-day period beginning on the last Friday in May 2023, and will bring thousands of competitors, officials, and spectators, to Camden County.

About the Camden County Boathouse

The Camden County Boathouse features six boat bays for storage of close to one-hundred racing shells. It houses seven local rowing clubs that train daily on the Cooper River, ranging from middle-school-aged to adults in their senior years. Daily rowing on the Cooper started in 2001 with one-hundred area rowers, and that number has now grown to more than 400 rowers practicing every day.

The boathouse has increasingly been chosen to host major events for the nation’s best rowing athletes. In 2018, the venue hosted the 92nd Annual Stotesbury Regatta which attracted more than 6,000 rowers from 195 schools. The following year, the Gold Cup Challenge chose to bring international competitors to Cooper River for the first time after spending decades on the Schuylkill River.

For more information regarding the Camden County Boathouse and rowing on the Cooper River, please visit https://camdencountyboathouse.com/rowing/.