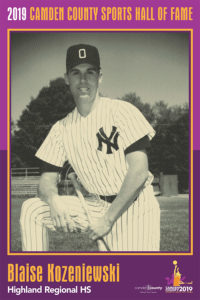 Blaise Kozeniewski, a graduate of Highland Regional in 1988, was a three-sport scholar athlete earning 11 varsity letters. Blaise left his mark of excellence at Highland Regional High School, where he lettered in soccer, basketball and baseball, and captained all three teams his senior year. In addition, his accomplishments on the field and court earned him numerous post season accolades and awards. Specifically, in his senior year, Blaise received All-Conference, All-Group and All-South Jersey honors in soccer, and All-Conference and All-Group recognition in basketball. But it was baseball where he truly excelled, earning All-Conference, All-Group, and All South Jersey honors in both his junior and senior years. He batted over .400 all four years and was a stellar defensive player as well. Blaise represented Highland Regional in both the Garden State Games and the Carpenter Cup, was a member of Team Brooklyn in the Continental Amateur Baseball Association Tournament, and was named a South Jersey Top Ten Male Athlete by the Courier Post and Philadelphia Inquirer.

Blaise continued his baseball career after graduation at Camden County College. There he was named to the All-Region 19 first team, Converse All-American first team, and the NJCAA All- American Team. He earned the Clark W. Leeny Memorial Award for academic and athletic excellence and the Rawlings Big Stick Award as the Mideast Batting Champion with a .533 batting average.

As a result of Blaise’s outstanding career at Georgia, the next year he was drafted by the New York Yankees. His first year with the Yankees in “A” ball, Blaise led the team in hitting and doubles. Unfortunately for Blaise the Yankees had drafted another shortstop by the name of Derek Jeter the same year. Though Blaise had a successful first year in the minors as an infielder, he was moved to the bullpen as a pitcher the next year. He was eventually traded to the Chicago White Sox where they also wanted him as a pitcher. After four years in the minors Blaise decided to become

Blaise is grateful for all the coaches he’s had, from youth sports through professional, for not only their time and support but for also helping him be successful as both a player and a coach. Above all, Blaise thanks his mother, Carolyn for her unwavering support at home and in the stand; and his father Stephen, for instilling in him the importance of fundamentals, dedication and fair play.

Blaise was inducted into the South Jersey Baseball hall of Fame in 2004, and the Highland Regional High School Hall of Fame in 2017. Today, Blaise lives in Williamstown with his wife Kim and their daughters Callie and Shaye. He continues the tradition established by his father- coaching his children in soccer, basketball, softball and volleyball. He now works as a union electrician for IBEW.