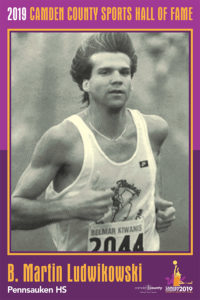 was to follow. He would finish first in every race he entered that year and would lead his team to the number one ranking in South Jersey. He would set the course record at the South Jersey Conference Meet, the South Jersey Group 4 sectionals, the Camden County Meet, and the group 4 state meet. His time at the group 4 state meet was 15 seconds faster than anyone else from all the groups. He capped off his season by winning the New Jersey Meet of Champions while setting the meet and course records. For his efforts he was named to the National All-American Team by Harrier Magazine.

In Indoor track, he broke Marty Liqouri’s state indoor two mile record with a time of 9:04.5. In 1975, running in front of 17,000 people he won the Millrose Games high school mile (defeating at the time undefeated Kevin Byrne) in a time of 4:15.5 which ranked him 20th all time in the nation. During the outdoor track season Marty would continue his assault on the New Jersey Record Board. He would run a six mile race on the track in a time of 29:03 which not only was the state record but the best time in the nation that year. He also set the state record in the 10,000 meters with a time of 30:50 which was the third best time in the Nation that year. He would go on to win the New Jersey Meet of Champions in the Two mile that season too.

In 1979, Marty was a world Cross Country Team Qualifier for the U.S.. After college he ran the
5000 meters in 13:49.63 which was one of the fastest times in the country. In 1982 he would win the Manhattan Borough 5 mile Championship, defeating 1,700 other runners including two time all- American Louis Ostolozaga in a record time of 23:45.3. In 1984 and 1988 he qualified for the Olympic trials. He was also ranked in the top ten of the world in the 15 Kilometers.

Marty’s spectacular career has not gone unnoticed. He has been inducted into the Manhattan Athletic Hall of Fame and the South Jersey track and Field Hall of Fame.