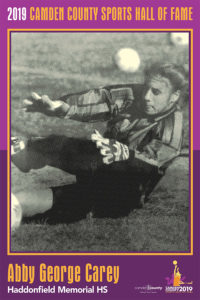 Abby was All Colonial Conference at Third base her Junior Year. A shift to Shortstop during the Senior season had the same result with an All-Conference honor.

As a standout athlete in three sports, Abby tends to enjoy basketball the most because she is
always in the middle of the action. She also loved playing for Coach Trish McNutt; also a member
of the Camden County Sports Hall of Fame. During Abby’s tenure the Bulldogs won two State Championships. In these two Championship runs Abby recalls an 11-point run in the fourth quarter her sophomore Year leading to victory in the championship game. A year later, as a Junior, Abby was awarded the MVP of the State Championship game. The 1995 team was prohibited from competing for another repeat performance though many considered them the favorites. Abby scored 1,077 points at Haddonfield and her hoops accolades include First Team All Group 1 her Junior year and First Team All Group 2 her Senior year. Her Senior year also included All South Jersey First Team, All State Third Team and Philadelphia Inquirer All Area Team. Abby has many games that she remembers but the game that remains with her the most was a triple overtime loss against eventual State Champions Middle Township representing their only loss during Abby’s Senior Year.

Though Abby enjoyed the excitement of basketball, she truly excelled as goalkeeper for the Bulldog’s on the soccer pitch. Abby was a fearless goalkeeper. Abby was First Team All Colonial Conference. Two times she was named 3rd Team All South Jersey. Following her Senior year, she was named 1st Team All South Jersey and 2nd Team All State. For the Bulldogs she recorded 50 shutouts and won two Colonial Conference Championships. Abby was only the second player in South Jersey history to achieve fifty shutouts in her soccer career.

As a top scholar-athlete, Abby was recruited to play Soccer at several top schools including Stanford, Penn, Davidson and Harvard. Abby chose to spend her collegiate days at Georgetown University. Her Freshman year was incredible with 115 saves that year and five shutouts. Her sophomore year was not as productive as she broke her leg against Villanova early in the season. The injury kept Abby on the sidelines until her Senior year. Returning to the goal her senior year adding a few more saves and another shutout. Abby, always enjoying the excitement when the game was coming to her goal, recalls the Notre Dame game her freshman year and recording 17 saves that day; which is still

a school record. Abby was named Team Captain for two years. She was also a Big East Academic All star for four years. Despite the shortened time in goal due to injury, Abby is #5 all time in career saves at Georgetown with 175. She is #7 all time with 6 career shutouts. She still holds the all time most single season shutouts with five during her Freshman year.