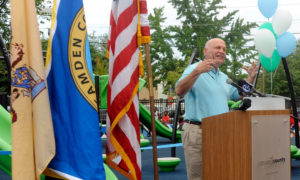 (Camden, NJ) – The Freeholder Board, officials from the City of Camden, Jaws Youth Playbook, and Cooper’s Ferry Partnership gathered today to unveil the newly renovated 4th and Washington Park in Lanning Square. The park is the latest in the city to undergo a complete transformation as part of the County’s initiative to improve public spaces in Camden.

“A year ago, families in this neighborhood didn’t feel safe bringing their kids here, but today they get a state-of-the-art space to play, relax, and come together as a community,” said Freeholder Jeff Nash, liaison to the Camden County Park System. “The Freeholder Board made this investment because we know full well the role that parks and shared spaces play in raising the quality of life throughout the entire neighborhood.”

In 2018, the Freeholder Board announced a $5 million investment targeting four of the City’s parks to be rehabilitated in partnership with the City and Cooper’s Ferry Partnership. The $1.4 million renovation of 4th and Washington Park is the second park rehabilitation completed as a result of that investment. Officials opened the first, Alberta Woods Park, in East Camden last September.

The renovations unveiled today include a new playground and sprayground, reconstructed basketball and handball courts with sports lighting, new fitness equipment for users of all ages, a new pavilion with seating, lighting, picnic tables, benches, landscaping, and new fencing around the park perimeter.

Former Philadelphia Eagles quarterback and philanthropist Ron Jaworski joined officials on behalf of his organization, Jaw Youth Playbook, which contributed $100,000 to the new playground. He spoke about the important role parks play in strengthening communities.

“My family and I have always known the importance of parks for inner city communities and at-risk youth,” Jaworski said. “A vibrant playground such as this can have a stabilizing effect on the lives of young people. The role of community parks is especially crucial for communities that lack the necessary facilities to keep their children in safe environments. Neighborhood parks provide a refuge for at-risk youth, helping to reduce crime rates and other costs to the community.”

Officials held several public meetings with the community and the Lanning Square West Residents Association during the planning stages of the renovation to ensure that the project reflected the neighborhood’s priorities. As an example, swings were integrated into the new playground space after the community expressed a desire for them. The project partners will continue to collaborate with the community in the coming months to develop a maintenance, monitoring and programming plan for the park.

“This investment in our parks is yet another example of the strong partnership between the City and the County and moreover the strong commitment to improve Camden’s neighborhoods,” Moran said. “The City has realized approximately $25 million dollars of total investment in the park system in recent years, with another $50 million on the horizon. We remain committed to providing a high-quality park within a 10-minute walk of all Camden residents. Our goal is to increase usage of our parks by providing residents with beautiful and functional open spaces to enjoy.”