Larry WIgley was one of the first great basketball players produced by Camden County in the mid-1950s, when the sport was beginning to really flourish. Born in East Camden, he led Woodrow Wilson to two City Series championships and a state title in 1950.

Wigley, now deceased, went on to an outstanding career at the U.S. Naval Academy and a 29-year career in the Navy. He attained the rank of Lieutenant Commander and went on to command a nuclear-powered attack submarine from the time it was built at the New York Shipyard in where else but Camden, N.J.

Larry was a 6’1” center on the great Wilson teams coached by Al Bass. He led the Tigers to two City Series titles when it featured holy wars involving Wilson, Camden, Camden Catholic and St. Joe’s. In his senior year, he captained the team and set new records in seven of eight categories in City Series competition and set a new school scoring mark with 386 points. As to what he meant to Wilson, his number “10” was retired when he graduated from the East Camden school.

When he led the team to the NJSIAA state tournament in Elizabeth, he was named to the All-State team picked by New Jersey newspapermen who followed the sport. Rarely did a South Jersey athlete get that recognition when the power was perceived to be in the North.

Wigley then matriculated at Wyoming Seminary in Pennsylvania, a stepping stone to admission at the U.S. Naval Academy in Annapolis. He grew two more inches, which he used to establish a new school scoring record. He also captained the Wyoming Seminary squad and received mention on rival teams’ All-Opponent list. 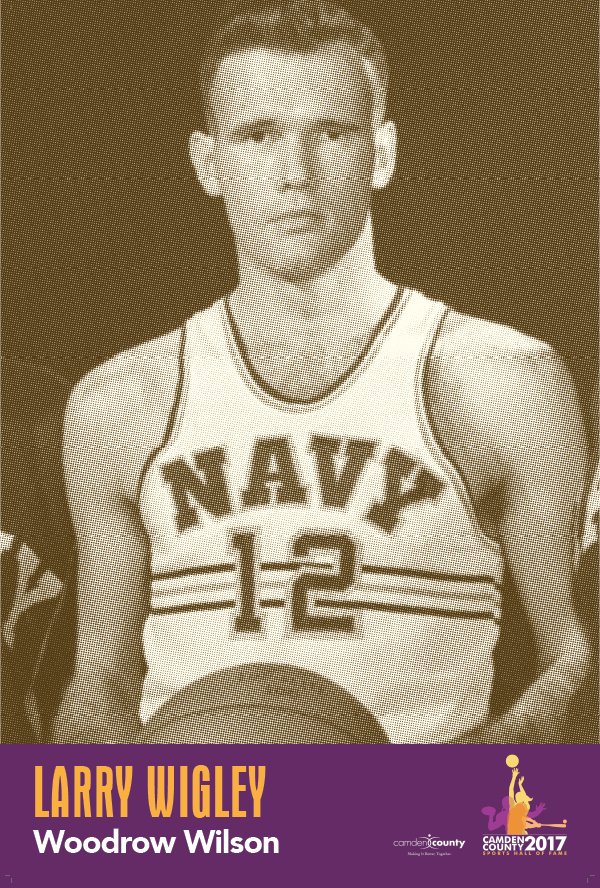 He was a four-year starter on Navy teams that played a tough national schedule and was among the leading foul shooters in the nation. Once again, he captained the Navy five, coached by Ben Carnevale, as a senior. He was selected to the “Who’s Who” list at graduation but then it was time to get on with life’s really important work.

Wigley spent 29 years in the Navy, almost all in the growing nuclear submarine field. His first assignment was aboard a destroyer, but then he attended Officer Submarine School. He had one last fling at basketball in 1958-59 when he was named to the All-Navy team and played in an AAU tournament, but then took over as engineering officer on a ballistic nuclear sub.

He progressed in rank as well and received command of first the USS Tulle and next the USS Guardfish when it was commissioned in 1966. During those years, WIgley, his wife Shirley and their three children lived in Cherry Hill. Before retiring as a LCDR, he also had command of the commissioning and operation of the submarine base in Bangor, WA. A footnote to his Naval career, he commanded the submarine repair tender USS Holland AS-32 which received the prestigious Battenburg Cup as a symbol of operational excellence to the best ship or submarine in the U.S. Navy Atlantic Fleet – the first time an auxiliary ship received that award.

Larry WIgley even wrote a published novel, “Mission Complete,” in 2005. He died in 2013 and is buried in, fittingly, Arlington National Cemetery. Our thanks to his daughter, Cynthia Wagner of Massachusetts, for providing these details.