Gail Shelly holds the scoring record for basketball (male or female) at Haddon Township High School. She tallied 1,914 points over four years and led the Hawks to their lone state championship in her senior year of 1985.

The daughter of Susan Brady and Gordon Shelly, she has two older brothers, Don and Jon, who “beat the heck out of me” but toughened her up for her future athletic career – especially for basketball. She played in the Haddon Township Athletic Association’s youth programs in softball and basketball and showed future greatness at that level of competition.

Gail played field hockey as a freshman but switched to softball and lettered for the next three years. But basketball was always her best sport and she had a scintillating career for Coach Fran Mulroy. At 5’6” she was the point guard who was a great ball handler as well as the Hawks’ leading scorer for four years.

In her freshman and sophomore years the Hawks lost out in the early rounds of the Group 2 tournament. But in her junior year Haddon Township won the South Jersey Group 1 tournament before losing to the eventual state champions, Henry Hoffman High.

Her senior year will always be remembered as she led the Hawks to their only state title in an improbable win over North Warren in 1989. Gail’s championship that year actually began with her on the sidelines. She was recovering from the chicken pox that required her to miss the first round of the tourney, but she returned to take the floor as the Hawks edged Florence and Hammonton to reach the state finals. 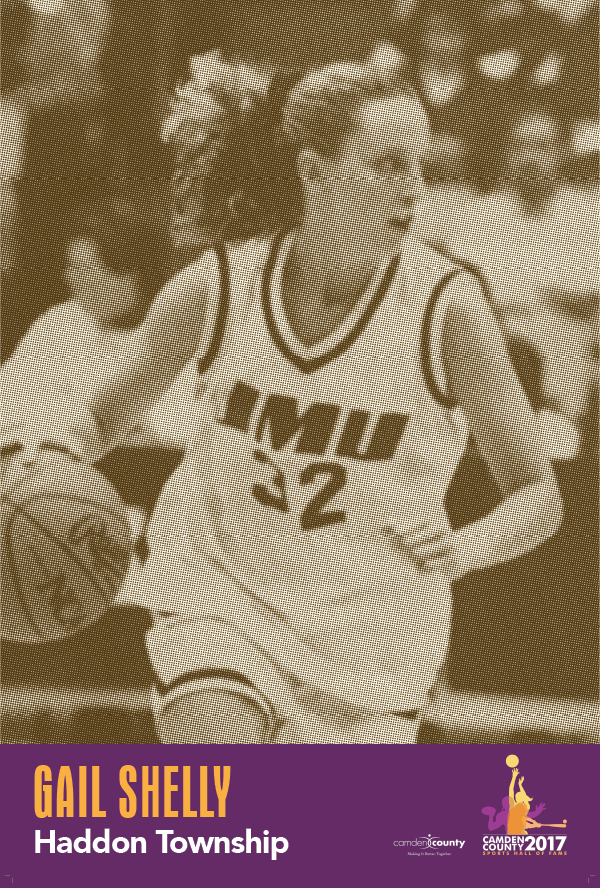 That game became a two-person show. North Warren had a 6’4” center, Pat Wynositz, that towered over everyone on the township team. She hit 17 of 18 shots from close in and scored 38 points in defeat. But Gail Shelly was more than a match and came through with her best game in the championship round. She hit 15 of 23 shots (6-for-8 behind the three-point line) and finished the game with 44 points. Gail also led the fast break that made the difference in that entertaining game.

It was no surprise that Shelly was an overwhelming choice for the All-State Group 1 first team. She earned a scholarship to James Madison University, who made it to the Sweet 16 in her freshman year and posted a big upset win over the number one team in the nation, Penn State.

Shelly was a contributing bench player in that year, as well as her soph and junior years. She tore her ACL in her senior year and that ended her career. However, she earned her degree and served as an assistant basketball coach at Bishop Eustace, Eastern and Haddon Township and then head coach at Eastern and Timber Creek.

She added a master’s degree from Rowan University and then moved into administration as district supervisor for social studies library media studies for the Black Horse Pike Regional District. Gail is married to Donna Seybold, who also had a big role to play for a Collingswood High state championship, and they live in Mt. Royal.