In a whirlwind six-year pro career, Duane Fisher went from high school bowler to the very pinnacle of his sport on nationally televised events.

He first showed promise by bowling a 678 series in the Youth Bowling Association at the age of 15. He next led the Pennsauken High team (which also included future NFL players John and Jason Taylor) to the South Jersey championship with a high average of 195, high game of 290 and a high series of 697.

He received All-South Jersey honors for three years (1977-80) and attained the high average and high game records. Fisher went on to win the Eastern Open in 1980 and took highest honors as the 1983-84 Lower Bucks County All Events and singles champion while a student at Camden County College. He also led his college team to the South Jersey team championship in 1982.

He earned his degree and also coached at Penn State sports camps and also the Drexel University team, both in the years 1984-85

Fisher joined the Professional Bowling Association in 1984 and began his six-year pro career. He won nine regional tournaments, defeating such bowling Hall of Famers as Mark Roth, John Petraglia, Norm Duke, Pete Weber and others. One highlight was winning the Tierno Master Club Invitational by rolling consecutive games of 300, 300, 205 and 299 in the process. 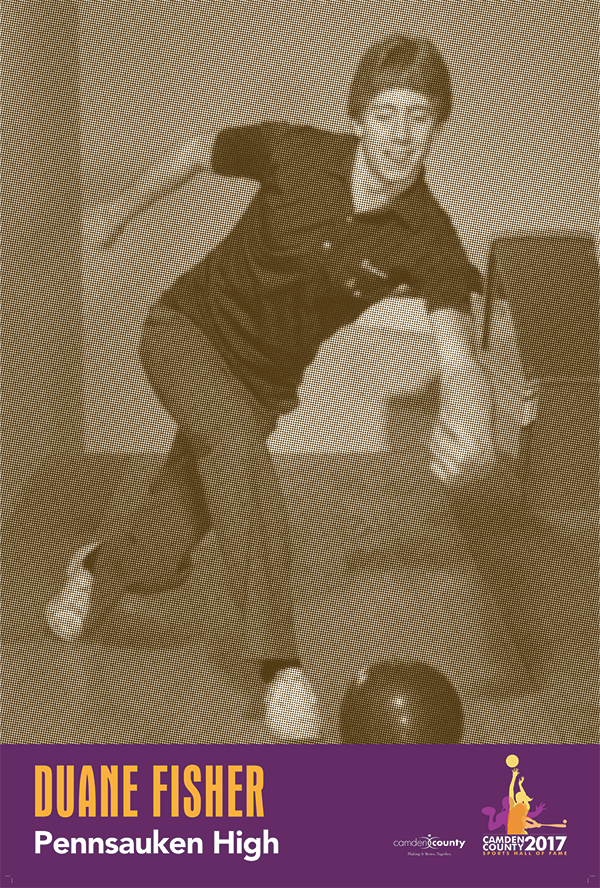 He also won the national title (Touring Player Championship) on Dec. 1, 1990, when he defeated Jess Stayrook by 248 to 244 in a memorable battle that was televised by ESPN. He later found out that the TV commentator said, “He (Fisher) must strike in the tenth frame to win. If there is EVER a moment in this young man’s life…this is it.” Fisher did indeed strike in the clutch!

“This was my biggest title,” he said. “I cannot conceive of a more memorable, victorious and remarkable way to end my professional bowling career.”

He had indeed bowled in his final pro tournament. He left the tour on top because he had a wife and two children and the tour travel was extremely hard on family life. Duane now works for Medtronics, a firm that supplies medical equipment to hospitals as region service manager. He and his wife, Susan, now have four sons: Ryan, Kyle, Justin and Colin. Susan is a clinical nurse specialist at the University of Pennsylvania Hospital.

Duane Fisher is by no means a one-sport guy. He loves playing golf and fastpitch softball. He played center field on the Pennsauken St. Paul team that played in the Fundamental Church Fastpitch Softball League (the last surviving men’s fastpitch league in the area). The team won the 1981 championship and he shared the league MVP with his father, Donald. That remains his favorite sports memory, ahead of all his bowling honors.