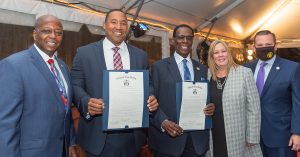 The New Jersey Vietnam Veterans’ Memorial Foundation honored Sheriff Gilbert “Whip” Wilson and Sheriff’s Officer Travis Ash aboard the Battleship New Jersey on October 28th. Both officers served in the U.S. Air Force – Wilson in Vietnam and Ash in Operation Enduring Freedom and Operation Iraqi Freedom – prior to their employment in law enforcement.

Sheriff Wilson served in the U.S. Air Force (1965-1969) on tours to Thailand and Vietnam where he served in the 821st Combat Security Police Squadron (Air Force Rangers). He was a member of the Camden Police Department for over 26 years, served as Commander of the Vice Unit and Supervisor of the First Community Policing Unit retiring as Lieutenant.

From his work with the Camden Police Department to his efforts as an elected official, Camden City Council (1997-2001, 2005-2010), the New Jersey State Legislature General Assembly (2010-2015) and now Sheriff of Camden County, he has dedicated his life to public service.

Sheriff’s Officer Travis Ash began his career in 2001 by joining the United States Air Force where he was a member of the Aero Repair Squadron. He quickly elevated himself by achieving the promotion of Senior Airman Below the Zone.

Travis exhibited unwavering devotion to duty and country by escorting the remains of over 120 United States Armed Forces Service Members who were killed in action during Operations Enduring Freedom and Iraqi Freedom.

On December 30, 2004, he was awarded the First Oak Leaf Cluster, the Air Force Achievement Medal for displaying great courage and steadfast dedication as he performed life-saving resuscitation on August 30, 2002.

Upon exiting the United States Air Force, Travis became a member of the Federal Bureau of Prisons achieving the rank of Corrections Officer and became a key member of the Riot Control Team. In 2007, he started his career with the Camden County Sheriff’s Office, commanding the Sheriff’s Honor Guard Team and achieving special congressional recognition on two separate occasions for outstanding and invaluable service to the community while earning his bachelor’s from Fairleigh Dickinson University.

The New Jersey Vietnam Veterans’ Memorial Foundation is committed to sharing the experiences of the Vietnam War Era and its enduring legacy with future generations. The memorial recognizes the valor of New Jersey’s Veterans and the sacrifices of their families and communities. The museum encourages learning by exploring the Vietnam War Era through inclusive and objective exhibitions.