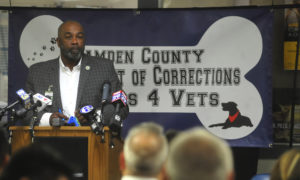 (Camden, NJ) – Four veterans diagnosed with medical maladies from their military service willnow be assisted by service-trained shelter animals thanks to Camden County Corrections inmates. The group is part of an innovative program run out of the Camden County Jail which partners inmates with animals to train as service dogs, and then distributes those trained animals to veterans in need.

“The opportunity to have inmates participating and learning a new skillset that will ultimately benefit veterans is a home run for public policy, and it is critical that we continue to find more innovative ways to support both communities,” said Camden County Freeholder Jonathan Young, who serves as liaison to the Department of Corrections. “This progressive idea will also assist us in finding forever homes for animals from our shelter population. The advantages gained by matching all of these disparate parts into a monolithic structure will be an improvement to the quality of life for our overall community.”

This groundbreaking program sponsored by the Freeholder Board gives inmates the opportunity to care for and train service dogs to be adopted by veterans, identified by the Office of Veteran Affairs, who will give them a forever home. Before graduation, the inmates spend months working with their dogs under the guidance of Above and Beyond Dog Training. So far, Camden County inmates have trained eight dogs as a part of the program, and those dogs are currently serving Camden County veterans throughout the community.

Service dogs are currently being used around the country to help veterans living with physical disabilities, hearing loss, PTSD, as well as those suffering from anxiety and depression. Preliminary results from the 2014 Pairing Assistance-Dogs with Soldiers (PAWS) Research Project, a yearlong study of 75 veterans conducted by Kaiser Permanente, showed that whencomparing veterans paired with service dogs to those who were not, those paired with dogsreported lower symptoms of PTSD and depression-related functioning, better interpersonal relationships, less substance abuse, and better overall mental health.

A second preliminary study out of Purdue University this year found that pairing a properly-trained service dog with conventual treatments for PTSD improved symptoms in military members and veterans.

“We already know the benefits of partnering these veterans with dogs because we’ve talked to them before and after, we’ve seen the change for individuals in our community, and the science is starting to catch up to that reality because now more researchers are interested in the idea,” Young said. “Even this concept of spreading the benefits to inmates is something folks all over the country are picking up on, and we’re seeing significant benefits for them as well.”

Inmate training programs specifically geared towards helping veterans have also popped up in Texas, Maryland, and Connecticut, as well as elsewhere, and inmate training programs for other individuals with mental health disorders and/or physical disabilities have been created across the country. A literature review prepared by the Massachusetts Department of Correction in 2012 compiled years of data and anecdotal evidence showing the benefits of these programs for inmates. Among them were improvements in morale, lowered blood pressure, reduced anxiety, and increased positive social interactions.

Another study from 2004 of an inmate training program in New York found that inmates evenoutperformed volunteer trainers outside prison walls. That study found that dogs trained as part of the Puppies Behind Bars program were prepared for more rigorous training at the conclusion of the program 87 percent of the time, as opposed to just 50 percent of the time when trained by volunteers.

Director of the Camden County Department of Corrections, David Owens views this initiative as a first step to opening many new doors for inmates.

“A journey of a thousand miles begins with one step, we hope that this program will be that step to change training and continue an evolution in corrections for New Jersey,” Owens said. “We know from the experience in other correctional institutions that this training partnership benefits the inmates, the dogs and the community.”