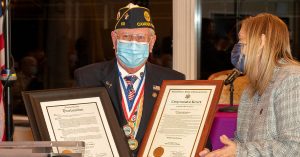 During the first in-person town hall meeting in Pennsauken, U.S. Army Veteran Robert Ralph Mac Murray was honored for his service to our nation.

Mac Murray was drafted into the U.S. Army in February 1966 and served active duty in the 3rd Armor Infantry Division in Freiburg, Germany. He was honorably discharged from the Army in 1972 after completing 2 years in the reserves.

Mac Murray went on to work for Bond Bread Company for more than nine before leaving in 1976 when he was hired by the Philadelphia Naval Shipyard, where he was trained to be a pipefitter. He worked for the Department of the Navy at the shipyard until it closed. While at the shipyard he received an Outstanding Performance award in 1984. He worked on the USS Saratoga, USS Forrestal, USS Independence, USS Constellation, USS Kitty Hawk and USS Kennedy. He was then hired by the Navy Public Works Center Norfolk Detachment Philadelphia. He worked a total of 33 years for the Department of Navy. He retired in 2009 with a total of 33 years of Honorable Federal Service.

He has also been an integral part of The American Legion Post 17’s “Thank a Vet” program, that provides any veteran an opportunity to stop in, have a cup of coffee and a donut in an atmosphere where they can talk with other vets.