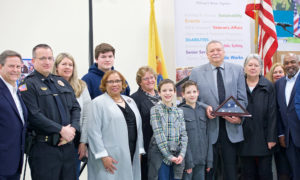 The Freeholder Board met in Magnolia for the next in a series of town hall meetings across Camden County called “your government in your neighborhood.”

“These town hall meetings provide the best opportunity for residents to ask questions and address any concerns in their community because we have each level of government available in one place at the same time,” said Freeholder Jonathan Young. “They also provide us the opportunity to recognize our residents for their service and contributions to their community.”

During the town hall meeting, U.S. Army veteran Michael DelViscio was honored for his service to our nation.

DelViscio served in the Army for four years, beginning in South Vietnam in 1968 before being reassigned to Ft. Huachuca, Arizona, where he served for the following three years. After leaving military service, DelViscio went on to spend nearly 30 years in law enforcement, serving in the Magnolia Police Department from 1973 to 2001.