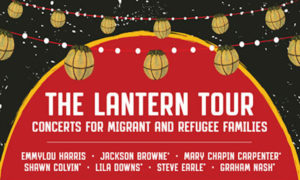 (Cherry Hill, NJ) –  Tickets for a special concert series coming to Collingswood’s Scottish Rite Auditorium will be available for purchase beginning this Friday, July 27, at 10 a.m. “The Lantern Tour,” featuring Emmylou Harris, Jackson Browne, and other special guests, is a five-stop tour to benefit the Women’s Refugee Commission and to voice opposition to the Trump administration’s immigration and family detention policies.

“The concert promises an intimate acoustic set from Harris and Browne, as well as Grammy award-winning artists Shawn Colvin and Lila Downs,” said Freeholder Deputy Director Ed McDonnell, liaison to the Department of Special Events. “We’re very excited to bring these and other incredible artists into our community to benefit an incredibly timely and important cause.”

The concert is scheduled to begin at 8 p.m. on Oct. 26, at Collingswood’s Scottish Rite Auditorium. Additional performers are scheduled to appear at the show but have not yet been listed.

The concert series is intended to bring musicians and music-lovers together in a show of solidarity against President Donald Trump’s “Zero Tolerance Policy” for individuals caught attempting to cross the U.S.-Mexico border without documentation. This policy resulted in the separation of thousands of families, many of which have not yet been reunited, despite a judge’s June ruling that the administration reunite them as quickly as possible.

The Women’s Refugee Commission was founded in 1989 to ensure the rights and protection of displaced women and children throughout the world. Proceeds from the tour will go towards the Commission’s efforts to support women and children who seek shelter in the United States, according to the tour’s website.

Additional stops along the Lantern Tour include:

For more information and to purchase tickets, visit https://thelanterntour.org/. More information about the Women’s Refugee Commission can be found online at https://www.womensrefugeecommission.org/.