Subaru of America Opens its Corporate Complex in Camden 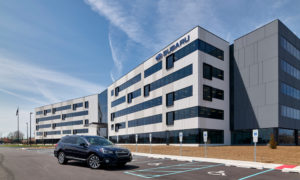 (Camden, NJ) – Subaru of America Inc. brings it family of employees and innovative car design, marketing and engineering to Camden planting a large flag firmly in the city’s Gateway neighborhood. This growing car manufacturer who has been expanding their national business year over year will join the ranks of several more companies bringing thousands of new jobs to the city.

Freeholder Director Louis Cappelli talked about the significance of opening the new offices.

“This is another momentous day for Camden and the county retaining one of our original corporate partners and ensuring they have the ability to grow their business and the real-estate to grow their company,” Cappelli said. “It’s amazing to think back just five years ago when an empty department store sat on this site contributing nothing to the city and now seeing this new campus rise from its ashes transforming the entire gateway of the county. Subaru and it vibrant new campus will now be the first thing people see when they come over the bridge into South Jersey and Camden County.”

Subaru of America was founded in 1968 in Philadelphia and has been based in the Delaware Valley for 50 years. Subaru has had its corporate headquarters in New Jersey since 1969 and had been in its Cherry Hill location since 1986. It also operated out of two offices in Pennsauken, a space at Executive Campus in Cherry Hill, as well as a distribution and training center in Florence, NJ. The company developed the all-new $118 million corporate headquarters in order to bring together much of its local workforce and provide them with a leading working environment, which it hopes will help spur even more growth.

Congressman Donald Norcross talked about the impact that Subaru will have on the city.

“It’s amazing to witness Camden’s historic transformation and it’s an honor to be a part of it,” Norcross said. “We’ve seen tremendous job growth in the City of Camden, along with major improvements in schools and public safety. We’re not declaring victory here, but it’s encouraging to see new businesses, parks and schools opening every week. It’s been just a few years since we watched a Subaru car breaking ground at this new site, and it’s great to officially have the company continuing the tradition – that started in Pennsauken over 50 years ago – of calling Camden County home.”

This project also complements the more than $1.9 billion of private investment being made by several other corporations throughout the city like Resintech Inc, Holtec International, EMR and Benjamin Foods.