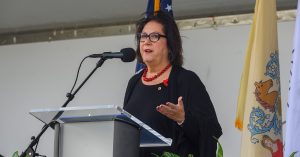 The statement below is by Commissioner Melinda Kane on behalf of the Board of Commissioners regarding the leaked initial draft majority opinion to overturn Roe v. Wade

“Last night, a leaked document showed that the Supreme Court of the United States is poised to overturn Roe v. Wade, the landmark 1973 court case that guaranteed federal constitutional protections of abortion rights and leave states to decide whether to ban the procedure altogether. While no decision is final yet, having the fate of reproductive rights for millions of women up in the air, is nothing short of frightening. Overturning Roe v. Wade would not end abortion, it would only end safe abortions and access to healthcare for millions of women and in turn, create a full-fledged public health crisis in this country.

The bottom line is that the incredibly difficult and lifechanging decision to have an abortion should be made solely between the person who is pregnant and their healthcare provider. Abortion is not a pawn that politicians, religious institutions or special interest groups can play to feed their own agendas.

The Board of Commissioners stands firmly on the side of women and we will continue to fight for and support their right to choose what is best for them, their bodies and their lives.”