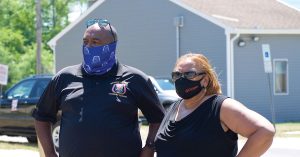 The statement below is by Freeholders Barbara Holcomb and Jonathan Young regarding Governor Murphy signing S855 into law.

“Earlier this summer, we joined New Jersey’s 17 other black freeholders in calling for the offensive label and term to be replaced. Today, we thank Governor Murphy for signing this historic legislation into law and sending a clear message to people of color and women throughout New Jersey that this office is as open to them as it is to anyone else.

The history of the term freeholder is rooted in misogyny, racism, and privilege. We have long believed that New Jersey’s elected officials deserve a more dignifying title, one that represents what we strive to be today, not the sins of those long ago who used the office to further the oppression of others.

Now more than ever, we must encourage diverse voices to join the ranks of public service. Along with the entire New Jersey family, we are eager to begin preparing new websites, stationary, and letterheads, which proudly bears our new title – commissioner. Most importantly, we are eager to learn of the impact this symbolic transition has on young women and people of color who will never again be forced to wonder whether the honor of serving in this position is available to them. On January 1, 2021, Camden County will officially transition all signage, letterhead and other identifying aspects of the position over county commissioner.”