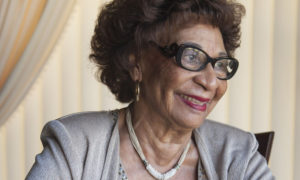 The statement below is by Freeholder Director Louis Cappelli in regard to the passing of former Freeholder and Camden High School Principal Riletta Cream at 4:45 p.m. on December 18, at Virtua Hospital in Voorhees.

“In profound sadness, the Freeholder Board mourns the loss of Riletta Cream, an institution and scion in education and public service.  She was a shining light to all children in the city and throughout the county and it’s hard not to see the indelible mark she has made on our public institutions with both a school and library bearing her name.

Riletta came from humble roots in South Camden on Sycamore Street and diligently worked to become the household name she is today by impacting thousands of students throughout her 40-year teaching career. She created lifelong bonds with administrators, teachers and students that could never be broken and even in retirement from public life dedicated her time to raising scholarship money for current students in the Camden School District.

Her 15-year tenure on the Freeholder Board was marked by several accomplishments and a genuine pursuit to help residents and make Camden County a better place to live. She was a mentor to me as a young public official and guided me as a new Freeholder when I joined the board.

There is no question in my mind, that the world is a better place because of her, even in her advanced age, she was sharp as a tack and committed to lifting up a new generation of Camden residents with her scholarship fund. Furthermore, she was a legend in the city and her legacy of character and faith will live on for generations to come.

Riletta was larger than life and served our community with a grace and dignity that could not be matched. In short, she was a woman of integrity and intelligence who cared deeply about Camden County and will be missed by all. The Board sends out our deepest condolences to the Twyne family on their loss and is grateful to have had her priceless contributions to Camden County. “ Photo Credit:  John Ziomek / Staff Photographer / Courier Post

On November 13, 1926, Riletta L. Twyne was born to the late William and Ella Twyne Sr. in Camden, New Jersey.  She was the first born of five children who predeceased her:  William, Eunice, Carlton and Shirley.

Riletta graduated from Glassboro State College (Rowan University) and Temple University.  She was a teacher, supervisor and elementary school principal until her appointment as principal of Camden High School in 1972.

She later married Arnold Cream Sr. (Jersey Joe Walcott).  Mrs. Cream retired from Camden High School in 1987, after devoting 37 years and 8 months of her life to the children of Camden.   She continued to give to the children of Camden City with the establishment of her scholarship fund in 1989.  She expanded her scholarship to include all four high schools i.e. Camden, Woodrow Wilson, Brimm Medical Arts and Creative Arts High Schools where each year one student became the recipient of a $1,000 scholarship from the Riletta L. Cream Scholarship Fund, Inc.  In 2011 she expanded her scholarship fund to other communities in Camden County as well.  This was done upon her retirement when she donated her funds to Camden County College and Rowan University to establish scholarships for students throughout Camden County but earmarked $15,000 of her own monies for Camden City students.

Continuing to support students throughout the county, Mrs. Cream donated the proceeds from her 90th birthday celebration to be used exclusively for technical training for both young people and adults.  In addition, monies would be used to provide books for the Whittier School library where she attended as a child.

After retiring from Camden High School, Mrs. Cream became an administrator for the BPUM, Inc. Day Care Centers located in Camden City.  Then, continuing in her most cherished role as an educator, she became an Adjunct Professor and Supervisor of Student Teachers at both Rowan and Rutgers Universities.

Freeholder Cream has had many accomplishments while a member of the Freeholder Board.  They include the restoration of the Camden City Council Chamber, renovation of Kennedy Plaza, and the ongoing improvement and upgrading of many County buildings, especially those located in the county seat.  Always striving to beautify the City of Camden, she incorporated public artwork in many of these projects.

Freeholder Cream is committed to the county’s educational initiatives by implementing such projects as the construction of new libraries, including the South County Regional Branch located in Winslow Township and the Ferry Avenue Branch of the Camden County Library System that now bears her name.

She led the Tech 2000 Program which put computers in every classroom, supplied distance learning equipment and provided technological training for teachers.  Additionally Camden County College has expanded to include the William G. Rohrer Campus in Cherry Hill and the Technology Center at the Camden Campus along with the addition of the Connector Building in Blackwood.

Along with Freeholder Cream’s many awards and accolades, too numerous to mention, one stands out among all others … On January 3, 1991, the Riletta Twyne Cream Family School opened its doors to the next generation of Camden’s children.  Named in recognition of her dedication and commitment, the school is a fitting tribute to a woman whose contributions to education have impacted so many.

She leaves to cherish in her memory two special nieces … Shirley Twyne Joyner (Robert) and Darlene Twyne along with a host of nieces, nephews, cousins and special friends who were involved in her daily life.

Lovingly Submitted by The Family

We will say our final goodbyes to Riletta Cream with a Viewing and Service of Remembrance on Friday December 29th from 5 PM -7 PM and Celebration of Life Viewing and Service on Saturday, December 30th from 9 AM – 11 AM at First Nazarene Baptist Church, 1500 S. 8th Street, Camden, NJ. The interment is private. The Ministry of Comfort is entrusted to May Funeral Home.