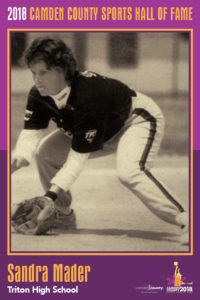 Sandy Mader graduated from Triton Regional High School where she excelled in 3 sports: Basketball – All Conference; Field hockey – All Conference, All Group 3, & All South Jersey, But softball was Sandy’s true passion. She played 3•• base at Triton where she was named Most Outstanding Female Athlete in 1982. In 1981 and 1982 she was All Conference 1st team, All Group 3 1st team, All South Jersey 1st team and Courier Post Player of the Year. She was All State in 1981 and 1982 and Gloucester County Times All South Jersey Team in 1981-1982. Sandy was team captain and MVP in 1981-1982. In 1990 she was named Player of the Decade for the 80’s and in 2000 she was named to the All Century Team for the Courier Post.

Sandy is a National Softball Instructor. She has helped several players go on to college and receive scholarships.

Sandy is an accomplished student-athlete, coach, teacher and administrator. As a student, Sandy went on to receive her Masters in Education and received her Administrator Management Degree at McNeese State in Louisiana. As a coach, she earned Rookie Coach of the year, Coach of the year 2 times. While at Alvin High School, she was recognized as Who’s Who Among America’s teachers.

She has served on the NIAAA Board of Directors an<!. many other committees. She teaches classes at the NIAAA conventions throughout the U.S. Sandy was named NFHS Citation Winner (Athletic Director of the Year in the U.S.) in 2004. She is also an NFHS speaker and moderator at their national conferences.

One of her most significant accomplishments was her work with the Texas University Interscholastic League in adding fastpich softball as a sport in Texas High Schools. She helped the Texas High School Girls Coaches Association Board add softball coaches to its membership and also helped initiate a Softball All Star game for the state of Texas.

Today Sandy resides in Pearland, Texas with her son Jake who is the light of her life.